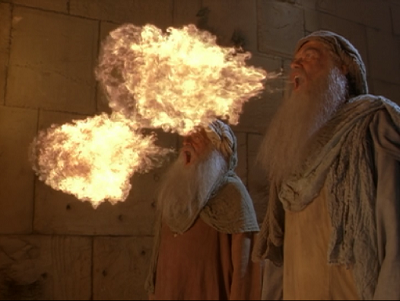 Left Behind II - The Christ Strikes Back

As the second installment begins, we're now deep in the "tribulation", a dark time in which the Antichrist (evil) uses his unimaginable supernatural powers to make a 90-minute movie feel like seven years of abject boredom and pointless spiritual self-mutilation. Kirk Cameron and his heroic Sunday school crew can't ever seem to decide if they're supposed to be resisting the Biblical prophecy of fire-breathing Dragon Jews[3] or trying to fulfill it, leaving us with an entire movie of people doing random shit for no reason. Wait, did we say fire-breathing Dragon Jews?

Well holy fuck. Whatever part of the Bible that's from, they should make a movie about that next time instead. And have them incinerate Kirk Cameron in super slow motion before flying off into space to Rage Against the Machine. While we wait for that to come out, let's take the time to browbeat one of those filthy heretics/nonbelievers with the ethereal grace of our superior, incredibly smug faith:

We'd tell you more, but there isn't anything else. There just isn't. Where do you go after fire-breathing Dragonjews renouncing their faith and filling their dragony Jewish hearts with the eternal smugness light of Kirk Cameron Christ? We have some vague and deeply traumatic memories about a 30 minute sequence involving a teenage girl being really mad at Kirk Cameron because she thinks he's engaged, but then he totally isn't, and why did this take so long to resolve oh god it burns 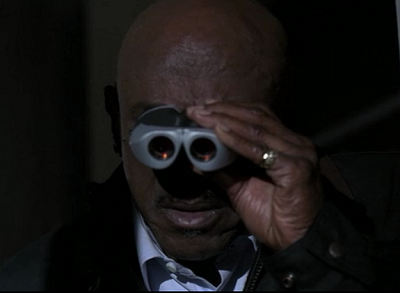 Left Behind III - Raiders of the Bible Storage Warehouse

The third installment begins with a deep and thought-provoking mystery, a sleek little thriller about how somebody managed to con Sony into buying the distribution rights to this flaming, trash-seasoned wreckage of soulless faux spiritual wannabe summer blockbuster Jesus drivel. Somebody at Sony must have at least fast-forwarded through the second film and given an ultimatum for them to fill it with explosions or get the fuck off their property, since this one is comparatively action-packed. Unfortunately, they forgot to be specific, and so the action consists mostly of divine intervention and high-stakes Bible heists: 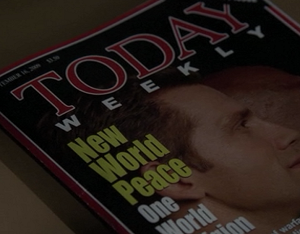 Today Weekly - The Official Magazine of Yesterday's Tomorrow!The U.N. (sorry, "Global Community") is more or less fully in control of the world at this point, doing really Satanic things like destroying weapons and negotiating world peace, standardizing currency, and of course making the cover of the fakety-fakest magazines ever conceived. If there's one thing you can always count on fundamentalist Christians hating, it's the thought of everybody getting along[4].

They're also pretty keyed up about destroying science, so naturally the plot mainly revolves around the (evil) Antichrist assembling a crack team of "powerful (evil) scientists" to spray a bunch of bibles with neon green poison science gas. You can tell he's really the Antichrist because he's smart enough to spray the poison on the outside of the bibles instead of putting it on the pages inside, which wouldn't have killed any of the Baptists for obvious reasons.

[4] That's as close as we can come to squeezing any higher meaning out of this hideous misshapen 5 million dollar chimera of movie, anyway.