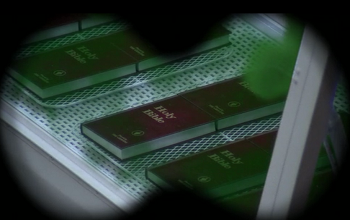 True to form, Kirk Cameron and his righteous band of irregular evangelists respond to this cartoonishly bungling existential threat with lots of pointless personal drama, more solemn attempts to convert the nonbelievers, and general ass-backwards bungly-assed bungle-jamming wholesome PG-13 Jesus hijinks. Near the beginning, Kirk Diggler decides to raise the stakes with a deeply unsettling and highly unorthodox father-daughter double-date wedding, only for his wife to come down with a nasty case of Bible poisoning on their four-day wedding anniversary, leading to some tearful conversations and a frankly hilarious sequence of Kirk shaking his fist at the sky and cursing the machinations of the cold, capricious God whose face he'd seen winking down at him from a rainbow so many years before. Don't worry though, she's saved by drinking the sacramental wine. From the cup that everybody else drinks it from. During an uncontrollable apocalyptic epidemic of infectious disease. Let's not dwell on the amazing and extremely unintentional irony of a goblet covered in the germs of thousands of people being the cure to anything, just go with it.

In fact, forget those assholes. All of them. The real star of this picture is the inimitable Lou Gossett Jr., who you may remember from his timeless role as pigeon-cooing, pregnant lizard-man Jerry in Enemy Mine. We're not going to claim he's more dignified here, since there are few things more humiliating than groveling to Kirk Cameron about finding Jesus, but at least he gets to put on a suit and pretend to be the President of the United States. And make no mistake, President LGJ is a man of action. He doesn't have time for meetings, or press conferences, or delegation of any kind. He's the world's first and last guerilla president, literally sneaking out the back door of the smoldering White House ruins every five minutes to go on solo black ops commando missions spying on the Antichrist's operations, blowing away peace-loving buddhist commie trash, stamping out the corruption of Roman popery, backflipping onto the wings of MiGs at mach speeds and ripping out their internal circuitry with his teeth to reprogram them to take giant, electric, freedom-loving Biblical napalm missile-shits all over heathens' faces, and most importantly, trying to suicide bomb the Russian (evil) Antichrist with a magic cruise-missile-summoning lapel pin[5]. The scary part is, only some of that was even embellished by us:

And on that note, we're washing our hands of Left Behind forever...wait, what's that you say? Nic Cage is starring in a re-make? What kind of God would allow that?

[5] Because Lord knows that there's no way anybody could aim a cruise missile at the Antichrist's 80th floor NYC penthouse suite office that he stands in all day grimacing out the window of, unless President Rambo was standing inside it too with a homing beacon. Yep, that's pretty much the action climax of the movie. They have to "smuggle" an amazing, top-secret cutting edge device past his security - which is actually a lot less secure than your average Denny's - in order to figure out how to shoot a giant fucking missile into the highest fucking floor of the tallest fucking skyscraper in the entire fucking city. Questions beget questions beget boredom, rage, and regret. Why did they have to blast him with a missile and kill everyone in the building instead of just shooting his ass?