So, Merlin: The Return. Just what is Merlin returning from, you might ask? Well, we've seen the whole movie and fuck if we know, but here's a list of possibilities we just made up:

- Hogwarts (assuming he was held back repeatedly and is still in the first year full of whimsy and generally harmless/useless magic)
- A dinner theater production of Le Morte D'Arthur (both he AND the lambshank got rave reviews from table 7)
- A four year binge on various illegal uppers, downers, and chemicals which don't have any noticeable effect on the human brain but huffing them was worth a shot anyway
- A daydream about an alternate reality in which the residual checks from Drop Dead Fred paid for more than the occasional McDonald's dollar menu splurge
- A ditch on the I-80 next to the Hardy's that kicked him out for spending most of the night scratching filthy limericks into the stall with the bathroom key and casting spells of putrification so potent and foul they had to call in a county sanitation sorcerer with his runes of undoing

Now, ostensibly this is a kids movie, so obviously some stupid kid has to save the world/decide the fate of the universe by being a stupid kid, only this time, King Arthur's Court is the away team (suck it, Clemens). All of them. The kid in question is Lil' Richie Gould, a walking embarrassing 90s commercial; he breathes Crystal Pepsi and shits Urkel-Os; he's like if someone rebuilt Jonathan Taylor Thomas in a laboratory out of parts of Nickelodeon characters with all the marketability sucked out of them, extracorporeally converted into super-pure GaK (~80 Culkins/mL), and then pumped back in through his ears like so many tasty Jazzy Jeff flips. 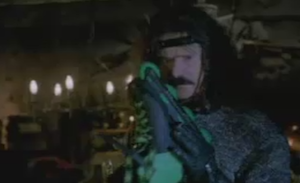 What sorcery is this?!The really annoying kid--who for the record we hate and think is totally stupid--alternates between Old Jersey, New Jersey, and Old New Jersey accents, and he wears the same horrible T-shirt and generic faux leather mallpunk jacket for about a week straight, until his best friend Joe-Dan "Jimmy" Jordan takes a header off the cliffs (not Cliff's the burger joint, but the actual cliffs near there--you know, Cliff's cliffs, next to Biff's)--in a hormone-fueled hotrod death race, leaving him to ponder the cold, lonely vacuum of male identity caused by the lack of strong, positive role models in his life.

Okay fine that doesn't actually happen either. Anyway, Richie has the fate of the universe dumped into his pudgy, underdeveloped hands in the form of some kind of mystical super-taser, which will cause anyone using magic to backfire and messily explode or something like that. Yes, a taser, because it turns out that all magic is electricity; Merlin gets his powers from the Earth's magnetic field.

If there's anything science has taught us by now, it's that all power in the universe comes in 3 basic forms: crystals, electricity, and lasers. Combine all three--especially if you've got a ridiculously big sword, sick pump, and/or flying v to rock them out with--and you're basically King Jesus McSinbad of Fuck-Wizard Street. Also, Stonehenge is the world capital of all science, and the only valid instruments of science are (1) ancient tomes and/or scrolls; (2) amulets, rings, monkey knuckles, or otherwise enchanted fashion accessories; (3) anything involving meters, scales, or magnets of any kind; and (4) tasers. Bonus points if your taser doubles as an unholy ghost-barfing magic wand.

Experimental controls and reproducible results are black magic and anyone who tells you otherwise is probably a witch, muslim, muslim witch, or astrologer (the highest station of lies) and should be summarily dragged to hell by skeletons. Not Tia Carrera, Warrior Princess though. As the world's foremost expert in the fields of quantum molecular portal-summoning and organic chemistry for the dark arts and mistress of all electricity (again, magic), she's staying on the right side of history by working for Mordred. Yes, she electrifies all of Stonehenge just to prepare for his glorious conquest and enslavement of all mankind, because he promised her extra funding for her brilliant scientific research program of "build a Tesla coil, only bigger." If only her scientific super-brain could have planned for a toddler holding a jumped-up flashlight that she built and using it on her boss instead of Merlin. Truly a sad day for science.

Spoiler alert--here's how it all ends: Lancelot apologizes to Arthur for banging his girlfriend and they pound that shit out and go back to being best bros for all eternity before riding the rainbow road or whatever the fuck it is back to heaven or wherever the fuck they come from the end because magnets. The end. Because fucking Magnets. And this time, we mean it.