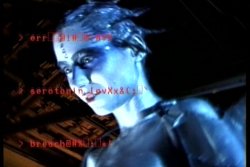 Who can resist a face like this?The movie cuts back to the four main characters, who have gone down to the beach to check out the stash they stole. As they get ready to go through the drugs, suddenly the screen is taken up by another computer message, this one announcing "LEVEL COMPLETE" and accompanied by video game sound effects. At this point I had no idea what was going on, but apparently getting to the beach is the end of Level One in the future. The gang opens the suitcase and starts going through the drugs when Sermon randomly shows up, babbling nonsense. Then the two girls beat him up and shoot him for no apparent reason. Maybe it was social commentary suggesting bums should be shot, in which case I agree.

The movie then cuts back to Zerox, who goes to work at some factory which apparently produces stock video footage of other factories. He sits down at a computer and falls asleep, then after some more stock footage in slow motion, klaxons start going off and he wakes up, puts on a gas mask, and runs away. He doesn't get far, as after he stumbles into a dark room, a disembodied voice tells him to take off his clothes. This appears to be a normal thing for him because he immediately strips naked, accompanied by a gratuitous shot of his penis. (Dicks in a movie either mean it's a piece of serious cinema, or it's a piece of shit. Guess which this is.) Then he lies down on a weight bench and puts a chain around his neck, which is the universal signal for a naked woman with wings and blue body paint to emerge from the shadows and start having bad Cinemax-style sex with him. If this is an example of the perks that factory-worker unions get for their members, I'm in the wrong business.

After a few minutes of humping set to awful techno music, Zerox starts freaking out, and suddenly the girl disappears and a giant robot rolls up in front of him and starts drilling into his gas mask, in an example of the union's terrible health care plan. A computer message says that he has been "impregnated". Then Zerox wakes up back at the computer terminal, presumably because the whole thing was just a dream. He obviously has a bad headache, though, because he holds his head and staggers out of the factory. He continues staggering down random dark alleys and eventually staggers all the way back to the church he was at before. It's really quite a lot of staggering. Zerox goes inside the church and collapses, where he's found by the four junkies, who beat him up for a while and decide to take him hostage to observe the effects of the drugs he's taken. Apparently the junkies are also amateur scientists.

Now that the four junkies have a hostage, they stand around talking for a while. Matrix points out that Metro sees life as a "bad music video." This gives the movie an excuse to actually turn into a bad music video for a minute or two, as the two girls strike poses with their handguns, interspersed with footage of the misshapenly bosomed Poser models. Once that's over with they all run out of the church, and Sin Tax throws a lit flare behind him as he leaves, which is apparently supposed to blow up the church or something, although the director obviously doesn't have enough money to show something like that. 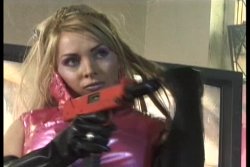 Candybar posing with her color-coordinated Uzi.Then it's suddenly daytime and the junkies are driving around with their prisoner. They end up at some big refinery in the middle of nowhere and mill around for a while, spouting their terribly witty dialogue, with the emphasis on "terrible." I'll only subject you to a small sample:

Matrix: "Call waiting... public phone, but no one's home and the machines are answering."
Metro: "Please leave a message."
Candybar: "And we'll get back to you!"
Matrix: "Soon as humanly possible."
Sin Tax: "Hold on, you two, stop feeding me telephone lines, or the next operation will be you." (points gun at them)
Metro: "At the sound of the tone, our time might be up!"
Candybar: "I hope we're not disconnected."

It goes on like that, but I didn't have the heart to keep transcribing it. Eventually they get tired of clever puns and start going through their drug stash again. This time they somehow realize that the drugs are all awful, and Sin Tax decides to go off to get some more by himself. He walks offscreen and suddenly ends up in the lobby of an empty office building. After riding up an elevator he bursts into a room where a guy in white face makeup and lipstick is swirling colored water in beakers, signifying he's some sort of scientist. Sin Tax shoots him and takes another briefcase that's sitting nearby, because apparently all scientists carry goody bags of various drug paraphernalia. As he leaves, Sin Tax says what I guess is supposed to be his catchphrase:

As he leaves there's another "LEVEL COMPLETE" screen. I guess the scientist was the final boss for Level 2. Sin Tax leaves the building and is magically back in the middle of nowhere again, and the four junkies go through the new stash of drugs and find it's all terrible. To show how bad the drugs are, Metro graphically shoots up with some more unidentified liquid, then vomits all over the place. There's a lot of bodily fluids being moved around in this film. 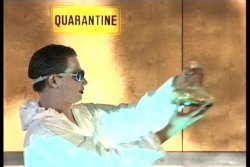 SCIENCE!The gang gets back in the car and drives away, and once they're back in the city it's magically nighttime again. They find their way to another random dark alley and talk to Orbit America again, who is still wearing the stupid Mickey Mouse hat and appears even fatter than he was before. The gang asks him about drugs and he opens another suitcase and pulls out a lot of clothes for some reason. It's possible he actually explained why, but I couldn't understand a word he was saying, so it didn't really matter. Orbit tells them go to see a man named Kiono Bikini, aka "MC Squared" which I guess is his in-no-way-original deejay name.

Meanwhile, the gang drives off to another dark alley and go into "Club Quarantine" which appears to be a back door someone stuck a sign on. Inside the club are a lot of scenesters and shitty fetish-club exhibitionists. There's several gratuitous shots of topless women with gas masks writhing on chains, people spanking each other, a girl twirling a firey baton, and some dirty old hippies that the movie makers weren't able to coax out of the room before filming. After the gang walks in and stands around for a few seconds, Sin Tax pulls out a pistol and starts shooting everyone in the club, one by one. The scenesters are apparently used to this, since they all stand perfectly still and wait their turn to be shot. As the rest of the gang goes around and starts looting the bodies for drugs and money, Sin Tax pulls a machine gun out of somewhere and again starts shooting everyone that he forgot to shoot the first time around, who once again wait patiently for their turn. Then after taking goodies off all the corpses, the gang starts filing out the door. One last guy that they forgot to shoot speaks up and tells them that there are cameras everywhere, so Sin Tax turns around and shoots him too. I guess that last guy was feeling left out of all the dying, because there's no other reason to remind a bunch of mass murderers that they haven't killed you yet that I can think of. After the gang leaves the club, there's another "LEVEL COMPLETE" screen, with an additional "32 CONFIRMED KILLS" message. I don't know what kind of video game this all is, but it's pretty sadistic.