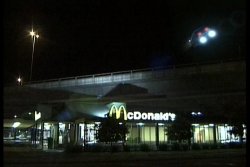 The future is more horrible than I dared imagine possible.The gang then drives to go see Kiono Bikini, aka MC Squared, who has two ugly vinyl-clad Asian women as his bodyguards. When they walk in, MC Squared is on the air, which appears to be some sort of TV station because there's video screens all over the place showing closeups of his misshapen mouth, and he keeps saying strange Asian catchphrases over the music. They buy some drugs from him and leave, and there's yet another "LEVEL COMPLETE" screen. So let's see, so far this "game" consists of:

Level 1: Go to the beach with a stash of drugs.
Level 2: Steal drugs from a man wearing lipstick.
Level 3: Slaughter everyone inside a nightclub and take their money/drugs.
Level 4: Buy drugs.

I should mention that none of this has anything to do with any virus or any infiltration of a gang, which is what the movie was supposed to be about. Anyways, the gang then goes to a slummy motel where the two couples have some bad Cinemax sex. Eventually Sin Tax gets pissed off for some reason and leaves, and the other three get dressed and go running around trying to find him. As they're walking down some dark street, a flying car comes up and shines a light on them, telling them that they're under arrest. There's a computer screen showing Candybar and Metro are wanted criminals and Matrix is an undercover agent. Apparently the cops in the future aren't very secretive about information like this because the movie cuts to Sin Tax who is driving around when suddenly this information flashes on his OnStar system. He drives over to rescue the rest of the gang and blows up the police car that's come to arrest them using a rocket launcher he apparently had stashed somewhere. The car blowing up is so awesome that the director shows it three times in a row, which unfortunately does not make it three times less lame.

With his new knowledge that Matrix is a spy, Sin Tax does the most rational thing: he drives them all to a McDonald's for some dinner. I don't know why McDonald's still exist in the far future, or why it's the only brand name shown in the whole movie, or why the movie makers didn't replace the sign with "Future Burger" or something. It's possible that in this future McDonald's won the Restaurant Wars, or maybe the filmmakers just didn't care, which seems more likely.

After they sit around eating their burgers, they drive over to a rave that's being held in another abandoned industrial park. They've brought Zerox with them for some reason, and when they go into the rave, they let him go. I can't tell exactly why they kidnapped him in the first place, considering that all they did was:

In any event, instead of running away or finding some cops, Zerox starts milling around in the rave, as do the four junkies. There's a lot of shots of laser light shows and people dancing and twirling glowsticks as the director attempts to stretch out the nonexistent plot before the climax. Eventually Matrix goes into the bathroom and Sin Tax beats her up and carries her out. He drives off with her passed out in the passenger seat and Candybar and Metro run out of the rave after them. Meanwhile, Zerox goes into a bathroom and starts throwing up in the sink. I don't know why this movie is so obsessed with showing closeups of people shooting drugs and vomiting. Maybe they want to show that the actors went through as much discomfort as anyone stupid enough to watch it. 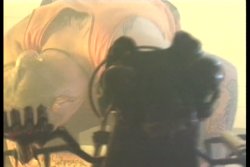 Number 5 leaves the safety of the chest-womb to go out and see the world.Sin Tax soon stops the car, takes off his shirt, and starts rummaging around in the trunk. Apparently he's looking for a gun to shoot Matrix with, and he doesn't want to get blood on his good clothes. However, Matrix wakes up and runs off down some big tunnel, and Sin Tax starts walking after her. He must have the same eerie powers as The Mummy, because despite the fact that Matrix is running for her life, Sin Tax is always right behind her. Finally after Matrix comes to a dead end, Sin Tax catches up with her and starts smacking her around some more. Candybar and Metro catch up to them and Sin Tax, who I guess has gone crazy for some reason, turns around and shoots them both. Actually, he shoots them both with one shot, because Metro acts like a true gentleman and pulls Candybar in front of him right as Sin Tax fires, but her breast implants aren't enough to stop the bullet and it goes through them both.

Meanwhile, Zerox is still vomiting and moaning in the bathroom, and he finally collapses to his knees. Suddenly he starts screaming as a TWO FOOT ROBOT randomly pops out of his chest and rolls away. I assume that this robot is somehow metaphorical since Zerox didn't die by having an object the size of a breadbox inside his ribcage. Plus I don't know what sort of virus causes big robots to burst from your chest. It's probably found in Africa.

Then the movie cuts back to Sin Tax, who is holding a gun to Matrix's head. Before Sin Tax can shoot, we see a montage showing a little girl, who I guess is supposed to be Matrix as a child, and she grabs the trigger and shoots herself instead. Maybe it's supposed to signify she had a bad childhood and thus she's killing herself, I don't know. Then Sin Tax walks away into the darkness. Then the movie cuts back to Zerox, who wakes up and walks off. The end.

So let's reiterate: "Narcosys" is supposed to be about an evil corporation, who is never seen, hiring a girl, whom we know nothing about, to infiltrate a group of a couple of junkies, for a reason that is never given, who kidnap a random factory worker, who never speaks, and who is infected with a virus, which doesn't appear to really do anything, which was apparently engineered by the same evil corporation, completing the grand circle of idiocy. Ignoring all these factors, which is easy enough to do, it's about a gang of assholes who take drugs and run around murdering and stealing and occasionally showing their dicks. I liked that movie better when it was called "A Clockwork Orange".