Oasis of the Zombies

Franco wastes no time in flexing his creative rectal muscles, constructing a labyrinthine plot that involves interwoven storylines a la Memento. And just like the main character in Memento, our director keeps forgetting really important stuff like who the characters are, what country we're in,etc. The team wanders aimlessly through the streets of Akron or Budapest or wherever things were gettin' filmed this week, until they're accosted by the mustached soldier, who came all the way back from the oasis to find them at random, burble some nonsensical bullshit, and collapse dead at their feet. "What happened to him?" the hot blonde asks. "He met the walking dead," an Arab passerby helpfully explains. Well, that answers that. The explorer's body is burned on the sidewalk out front of the villa, presumably so he doesn't return to life and waste another eight minutes of our time staggering around the set like Gary Busey at Burning Man.

We get a brief detour to a makeout scene involving the hot blonde's tits and some half-hearted necking. When Loverboy returns to his buddies all cow-eyed with passion, we get a real treat, the only half-believable dialogue in the entire movie: 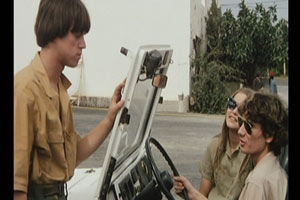 Robert: Haha you look like Heathcliff from Wuthering Heights
Other Guy: Fuck off

Somewhere, Tarantino is weeping. Never fear, though, as the fearless explorers toodle off into the desert towards the oasis, we're soon back to our exacting standards of shit script:

Robert: The sheik said it was 100 miles.
Other Guy (thoughtfully): Hmm, maybe desert miles are longer than country miles.

As the jeep pulls into the dreaded oasis, there's more lingering, luxurious closeups of leaves and dried branches, and sand dunes, and local flora, and of course the occasional skull just to keep things edgy. At the oasis, the blonde girl shows up again out of nowhere, presumably for the sole purpose of uttering the timeless phrase, and I quote, "The zombies! They come out of the sand which is here!" Now I know why Subway and Quizno's have had so much trouble establishing a foothold in the North African sandwich market.

So everybody mills around behind the Best Buy for a little while before breaking out a couple of shovels and digging at random places in the sand, a questionable strategy since the oasis apparently covers a dozen or so acres of real estate. Well, I should clarify: the boys dig, the girls wander around poking at the sand with little sticks and talking about girl stuff. Soon it's nightfall and everyone sacks out in their tents to wait for the zombies. The Arab guy gets first watch because everybody knows Arabs make the funniest noises when they get eaten by zombies. I haven't mentioned him so far because he came out of nowhere, doesn't have a name, dies in the next paragraph, and has no dialogue. Actually, I take it back, he has the following dialogue: "AAAAAAAA! AAAAAAAYYYYAAAAAAghghghhgh!!!" 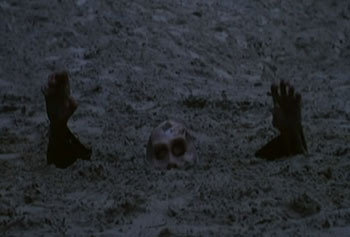 I kind of set myself up for failure with Oasis of the Zombies because I was foolishly hoping we might get a bunch of zombies erupting from the sand. As we all know the problem with filming zombies is they're so fucking slow that it's very difficult to generate any surprise out of a zombie attack, unless you go with crack zombies like in 28 Days Later. Unfortunately there are no sweeping innovations in zombie attack; the desert's empty...the desert's empty...the desert's empty...the desert's full of zombies! Before you can say "this is fucking stupid" the Arab is overwhelmed with ravenous bloodthirsty zombies that dress like unemployed landscapers and are deadly at .03 mph. True to classical zombie form, the zombies don't really advance but shuffle their feet in place like your parents at a Kenny G concert. Apparently our heroes are close to unearthing not just the Nazis' gold but their precious supply of Quaaludes.

The college Frenchies are befuddled, their minds racing for a plan. Hey, I have an idea: hop in your little Jeep and come back in the morning. Oh, fiddlesticks! There's no gas in the Jeep! I guess when you're camping at the Oasis of the Zombies, fueling your escape vehicle is one of those jobs like picking up the beer bottles, everyone just assumes someone else is gonna do it. Trapped, the teens stand around hands on hips as about a dozen zombies or so aimlessly stagger in their general direction. Robert, the curly-haired protagonist, has a great idea: "We'll make Molotov cocktails! Like in school!" Of course, Robert, magna cum laude graduate of the Che Guevara School of Retardation, doesn't throw real Molotovs, far beyond this production's modest budget of $8.25 and some Safeway coupons; he lobs an empty Bartles & Jaymes at an unidentifable target, possibly his agent. Then we hear a loud boom, and we see an unemployed landscaper flail his way into a sand dune. I am not responsible for the gouge marks your chair's armrests may suffer as you witness this FXhibition. 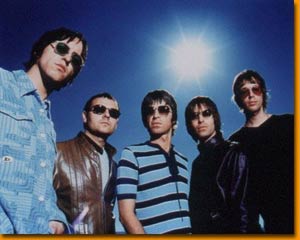 Can it be that we've found an oasis more brainless and irritating than this one?

Craftily pouring a ring of gasoline around the campsite, the brave trio keep the zombies at bay. This is a godsend for the director: hey, since we now have billowing clouds of black smoke on top of it being the middle of the night, I don't have to film anything, really, do I? So the next couple of minutes might as well be excerpts from a firefighting documentary of some kind, since all we see are dim shadows moving around and some slack-jawed motionless bystanders, which for all we know could be the film crew standing around checking their watches and counting down the hours til they can get the hell out of here and go to Denny's.

Despite being around eight inches high, the roaring inferno keeps the zombies at bay until daytime, when they magically vaporize into thin air. Then Grandpa Nomad shows up on a camel and asks Robert if he found what he was looking for. "I found myself," Robert responds cryptically, and the group drives away. Hey, I found something too, Robert: a big French pussy right where you're standing! Why don't you grab the gold? What happened to your wacky foul-mouthed buddy? I was half-expecting a post-credits easter egg showing the other guy feigning death until they left then digging up the gold himself, but unfortunately Oasis of the Zombies has no credits. It only took eleven or so people to make and they're all listed at the film's breakneck beginning.

This film has it all: actors, scenery, some cameramen, a director. That's the closest thing to a compliment you'll get from me on Oasis of the Zombies. If you meet director Jess Franco, please kick him in the nuts and then kick him in the face 80 times, once for every minute of my life I wasted when I could have been doing something more fun, like hammering nails into my kneecaps. Get it? Because this flick is so bad that anything would be...would be...yeah, I should write for the movies. After seeing this abortion of a DVD I have hope that anyone can make it to the silver screen.