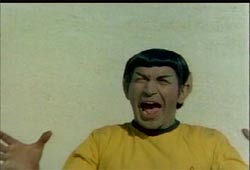 Cry havoc!Omer is off on his own getting salt-suckingly seduced by the now hot and bikini-clad salt-sucker. Just as things are turning dismayingly towards Omer convincing the creature to suck salt from an unfortunate part of his body, Spak arrives and sees the creature as a beautiful Turkish Vulcan woman. Omer tries to warn Spak that it's an evil lie but Spak is apparently under some sort of mesmeric power. Kirk arrives and similarly tries to warn Spak, which causes an extremely long and extremely awkward hand to hand battle to take place between Kirk and Spak. Most of the fight involves each holding a metal bar and pressing it against the other's metal bar while making exertion faces. This also happens to the beach party music featured in the credits.

The salt-sucker flees and then the professor, who is back in his lab, sends his suddenly nimble manbot out to attack the crew. Spak and Kirk come to their senses and a quick-thinking Omer tosses them a Turkish Phaser to easily deal with the karate-posing manbot. Just when the day seems nearly won a whole mass of hairier manbots appear in the nearby hills and begin edging forward. They cry out angrily and Spak returns their feral scream in the dorkiest manner possible. More fisticuffs break out, with Omer, Spak, and Kirk all trying to battle about six of the manbots each.

Kirk calls the Turkish Enterprise and the real McCoy beams down to aid them in stopping the professor. The crewmen briefly catch the professor but he is murdered by the salt-sucker, which then mesmerizes McCoy. Under its influence, McCoy disarms Kirk. Kirk manages to convince McCoy to shoot the salt-sucker repeatedly, which kills it. We finally see the salt-sucker's true form and realize that it's the same as the Star Trek episode only with much more gorilla costume and fright wig involved. Omer, Kirk, Spak, and McCoy return to the orbiting Turkish Enterprise.

There they bid Omer a fond farewell and transport him back into the chair he was sitting in next to his bride-to-be. Omer begs for them to take him back but the film must end on a waa-waa-waaaaaaaaa note.

I have very mixed feelings about "Turist Omer in Star Trek". Conceptually it is quite possibly one of the strangest movies I've ever seen. It has obvious comedy elements - namely the Turist Omer character and everything he does - yet it is a totally non-ironic duplication of Star Trek. Whenever Turist Omer is off screen, and sometimes even when he isn't, the plot and acting are deadly serious albeit unbelievably terrible. That makes this film either one of the most underappreciated works of genius of our time or one of the worst movies ever made. I imagine "Turist Omer" as Turkey's 1973 version of Ali-G; he's not funny because of what he says and does, he's funny because of who he says it to and where he does it. My theory runs into problems though when I consider how much time is spent with the plot and characters of Star Trek and how earnestly the material is handled.