Still, there's more to great villainy than just standing on street corners, making Playstation 2 jokes. There needs to be some motivation. Rich Nice pays a visit to his mysterious benefactor, known only as Big Man. We know Big Man is mysterious because when Rich Nice goes to see him in his tiny, unlocked, easily accessible apartment, he's already waiting for him, sitting in a chair with his back to the door, so we can only see the back of his head. He's like Dr. Claw from Inspector Gadget, only without the high tech base or the cool voice. Or the claw. Or the doctorate. Hell, he doesn't even have a cat. Still, Big Man commands Rich Nice's total respect. Evidently, Rich Nice is fresh out of jail, and while he was doing time, Big Man supported his mother financially. In other words, Rich Nice owes Big Man a whole wad of cash, and he intends to get it the only way he knows how - selling drugs. He shouldn't have a problem. After all, how hard could it be for him to find customers? He hangs out with a guy named Dope Fiend.

From this glimpse into the seedy underworld of poorly named villains and cramped, yet affordable housing, we transition to the moral center of the film - two brothers beating the crap out of one another for no reason. Sirus and his older brother Dan (played by Vince Bowman) square off at the dojo (read: community gym) where they have presumably established their school. I say "presumably" because, while this movie is ostensibly about two karate instructors who have recently opened a karate school, we never see them actually teach karate, nor do we meet any of their students. We do, however, meet Sensei Bo, whose du-rag and ratty dreadlocks should in no way indicate any lack of inner calm or zen wisdom on his part, just like the fact that Sirus and Dan take orders from Sensei Bo should not in any way indicate that this is, in fact, Bo's karate school and they're just a couple of guys who have nothing better to do than to hang out there.

Bo lays down the rules:

Sensei Bo: "This is a street fight. And the only rules are - there are no rules." 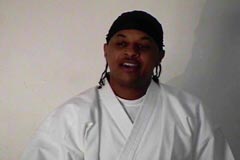 Sirus, Stacey, Dan, and Dan's girlfriend NeverBeSeenAgainInThisMovie go out for a nice dinner. They all seem to be getting along fabulously, but who should walk into this otherwise completely empty restaurant but Rich Nice and his life partner, Raven. Rich Nice and Sirus have a run-in in the bathroom, in which Rich Nice reveals that he and Stacey used to date. He also reveals that he likes to talk to himself when he pees, as he continues blabbing on about how bad of a guy he is long after Sirus has left. I'm sorry, but I just have some trouble feeling even remotely threatened by a bad guy who talks to his own penis.

All the same, the thought of Stacey and Rich Nice together eats away at Sirus and leads him to start an argument with her later that night. She leaves in a huff, but not before taking off the ring he gave her, tossing it into the air, and then punching it at him. If you are currently wearing a ring, try taking it off, throwing it up into the air, and then punching it across the room at something. Note how it does not work, hurts your hand, and is dumb. Nonetheless, Stacey manages to send it flying right into Sirus's hand, which is actually foreshadowing something to come. I won't spoil it for you, because you can't read the rest of this review if you've laughed yourself to death.

Sirus and Dan attend church, where the reverend gives a vague, unhelpful speech about the abundance of drugs on the streets in the community. Once again showing Vince Bowman's masterful use of juxtaposition, this highly moral scene is followed by a crooked cop visiting Rich Nice at his apartment. The cop sits at a shitty-looking table, shuffling a deck of cards for no real reason. When Rich Nice walks in, a bit surprised to find this unexpected guest in his own home, the cop plays it cool:

"If the trouble train leaves San Francisco at 6:30, and the money train leaves Chicago at 7:48..."Suddenly, the shuffling makes sense. I mean, the cop has to do something to stay awake. Rich Nice goes on to explain that this shitty table is a family heirloom, that his father worked himself to the bone to afford this shitty table, and eventually died protecting this shitty table from shitty table thieves. Now, the shitty table serves as a reminder to Rich Nice that he must never become a wage slave like his father was. Then, for some reason, he pulls out a giant shuriken and blows on it, causing it to fly into the cop's arm. Allow me to stress, having watched this scene several times now, that there is absolutely nothing for Rich Nice to gain by throwing a shuriken at the cop. Furthermore, unlike Stacey's ability to punch a ring through the air, Rich Nice's ability to blow shuriken at people isn't foreshadowing a damn thing. I hate this movie.

Sirus happens upon a neighborhood youth by the name of Robert Roddriquez in the middle of a shady deal with a punk in Rich Nice's employ. Sirus uses the power of karate to send the punk running, then uses the power of tattling to tell Robert's mother on him. Being a nice, stand-up, just fantastic fucking guy, Sirus gives Robert a fresh start by offering him a job sweeping the floors at the karate school. So, we've got a disadvantaged minority youth who has been given a chance to avoid a life of crime and lift himself up through hard work. Naturally, he's doomed.