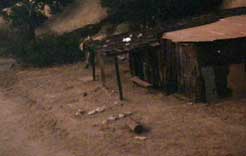 This beautiful tropical island has everything: rabbits, sheds, rabbits on top of sheds... Everything!The cast and crew, including the esteemed Military Captain Guy and Lt. Kern, set sail on a lovely oil tanker or garbage barge or something that is clearly not a military vessel to the mysterious island. On the way they spend their time sexually harassing the women and shooting their guns randomly for no apparent reason. They anchor the military trash-boat close to the island and paddle their motorboat (yes, they do) onto the shore, where they walk around aimlessly and see the beautiful rabbits on old lean-to rooftops that inhabit this tropical paradise. They also throw rocks around for no reason and go over the ground with metal detectors in a very random pattern but they do not see any aliens because there are of course no aliens there for them to see. For some reason there seem to be no bombs, either, but there are no aliens for sure.

One guy finds something in the ground that he believes is a bomb so he hits it with a shovel, but in a flash of brilliance, Lt. Kern has the bright idea to blow the bomb up with C4 instead. After the very mediocre explosion that could probably have been caused by an m-80, the group finds a bunch of bones that they expertly identify as human. At this point they seem to become even dumber and more incompetent than they were previously and as a result run around the island amid the bunnies and dirt looking for something that might have killed the people whose bones they found. The sound of a cougar roaring plays constantly but the people don't really seem to notice this and instead they go to sleep because what with the cougar-type noise and the mass repository of human bones everything seems pretty much ok. 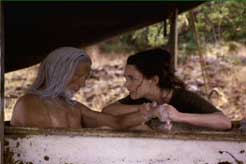 The old crazy man had a whole lot of very realistically-grey hair.

In the middle of the night, a long-haired crazy dude sneaks into their camp and starts making all kinds of crazy noises. The military rejects somehow manage to grab him and when they do he suddenly spouts off into a stream of psycho babble in which he predicts their impending deaths. They ignore him of course and take him prisoner and it becomes the sole job of one of the Marines for the rest of the movie to bathe him on a very regular basis. Captain Mean Military Guy starts making weird phone calls to The Base in which he speaks of killing the weirdo old man who has appeared out of nowhere. They come to the conclusion as a group that he was a military guy left behind fifty years ago at the end of World War Two and that he has been surviving by himself on the lovely bounty of rabbits since then, so they just keep bathing and bathing him in the hopes that he will disappear back to the 1950's. He continues to babble unintelligible words but the Marine people seem very disinterested in the words of a crazy man who has lived by himself on Rabbit Island for 50 years. 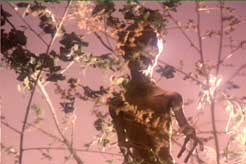 Two of the Marines, Hendricks and Banta, go exploring on the island. Hendricks finds a huge concrete block standing seemingly alone in the middle of the forest, so naturally he decides that the best thing to do would be to blow a hole in one corner of it and go inside of it. It obviously is not weird for this thing to exist and it definitely has nothing to do with aliens. While he is inside of it, Banta hears the cougar sound and the sound is heard of Hendricks screaming from inside of the concrete thingy. She gets scared and runs off directionlessly into the forest, but she is female and therefore falls down. When she gets up, she places her hand in a puddle of viscous, mucas-like ooze which appears to be acidic because she starts screaming and her hand becomes all bloody and mangled. As she darts back to the military-type jeep close by she looks up and sees OH NO A VERY SCARY ALIEN! She blubbers like a little baby all of the way back to incompetent military camp.

I would like to take this opportunity to discuss the aliens in this movie for just a sec. They are TERRIBLE. These things look like what would happen to Alan Alda were he to be a part of a time travel experiment gone horribly wrong. In this experiment he was supposedly to go back in time to his younger body but instead he time traveled into a rotting mound of necrotic tissue bound for a biohazard waste dump off of the coast of one of those poor African countries. These alien-things are like old men who have undergone months of heavy plastic surgery in order to look more like TV's beloved meatman, Ron Popeil, but whose doctors specialized in imitating duck calls instead of medicine so now the old men are sagging heaps of creepy flesh instead. They are a disaster. I have a sick feeling that someone went to "film school" and learned how to make these silly props, but I will say now that they didn't go to school long enough and that they probably should have stayed in school until they were dead so that they could never have been made. These aliens are the worst thing I have ever seen. They are absolutely disgraceful in every way that I can imagine. I can't believe that anyone thought to themselves, "Man, I'm making a really cool alien here, guys. This thing is scary!" Well, they are scary, but they are scary in the sense that it is utterly terrifying that human-kind can produce such utter shit. I am embarrassed for the species and ashamed to count myself in their number.

After she gets back, Banta convinces the others that they should go and look for Hendricks in the hole of the concrete block. They all crawl inside because there is no way that there could be anything dangerous in the enormous monolith of cement that has stood on a remote island in the forest for over fifty years. There is especially no way that whatever is inside of there could have anything to do with aliens. So they all go in together. 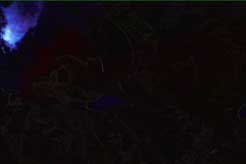 The suspenseful scene inside of the mysterious concrete block!

At some point, someone flips a light switch or something in the concrete structure and suddenly they are transported to a club or something because strobe lights begin to pulsate like mad and the lights become multi-colored and trippy. Whomever turned the lights on then turns them off again and somehow they draw a conclusion that whatever is going on in there it is somehow connected with light. Brilliant deduction, Marines! As you were! They continue on in what seems like ten minutes or so of vague, blurry darkness. Scary!

They keep shouting for Hendricks in the crazy cave, and eventually they find a mucous room which is full of old television sets and radios. It's like a 1950's Alien Auschwitz down there and everything seems to be coated in a fine layer of snot. Eventually they find poor Hendricks who has been stabbed many times with his own medical tools. They of course react very professionally and all begin shooting their guns at random into the darkness. Suddenly they see an alien on fire, and they scream a lot and escape the big block and run away. By the way, there are absolutely no aliens on this island, These marines are here strictly for bomb-diffusing purposes.