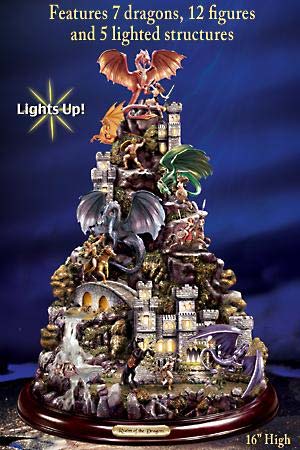 This is like one of those KFC Famous Bowls where they pile all their menu items in a bowl, except with dragons and other fantasy clichés. It literally is just a big pile of fantasy crap. Thankfully, they are promoting it as such, by boasting of the sheer quantity of dragons and lights. And let me tell you, they got the perfect balance. If this had just six dragons I would be like, "what, that's it?" Obviously, eight dragons would be overkill and completely ruin the artistic integrity of this stunning 3d mountain scene.

What bothers me most about this piece is this notion that it represents a magical quest. Just what is this "Magical Quest" they speak of? Climbing up a spire, fighting one dragon after another? What moron came up with that quest? If you live in the Realm of the Dragons and your grand notion of a quest is to fight dragons, then you're not very imaginative. Shit, this is the Realm of the Dragons, son. Dragons are everywhere. This is their realm, for Pete's sake! Not fighting dragons is a magical quest. A day fighting beholders or trolls is a magical day. Fighting dragons? That's old wizard hat. 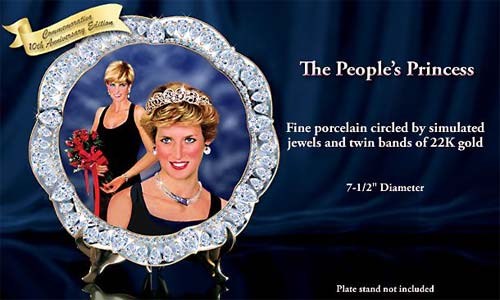 Princess Dianna, we loved you so much that we stuck your face on a plate and glued a bunch of fake diamonds to it. I know you're probably smiling in heaven, grateful that your fellow Americans are doing everything they can to remember your fine legacy of appearing on TV ten years ago.

Celebrate the memory of one of the most beautiful and beloved women in the world with this Diana, Princess of Wales tribute collector plate available only from The Bradford Exchange

When I finish eating my macaroni and cheese off your beautiful face, I won't even need to wash it. The tears pouring down from out of my eyes will cleanse any cheese residue right off. I LOVE YOU PRINCESS OF WHALES!

On second thought, maybe I'll save my money and just shoot at people instead.