Due or Die. Choose Your Own Adventure for the College Freshman 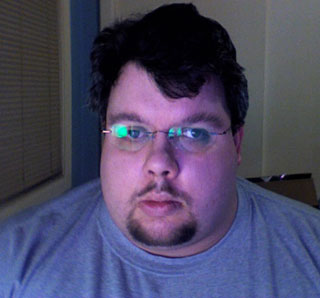 Nerd Jacobs does not like to be interrupted on a Friday night, and as you approach his door, you can hear him inside talking about Windows 7. He will not be happy, but you have the proper items for sacrifice. He is such a fucking loser though; he should be kissing your feet just for the attention, but whatever.

The room is dark, and as the door slowly opens, a waft of heavy, musty air, humid from his sweat, pours out over you. You cough and your eyes swell up, but you continue in, setting the package of Twizzlers in the open. He nods, takes the microphone off, and backs his chair away from his computer.

"I got a gay paper to do." You say. Nerd Jacobs nods. He turns down the Rush in the background before speaking.

"I have finished mine already." He says, holding it up. "It took time, time that I am afraid you do not have the luxury of."

"I can help many problems with computers and hard levels in games, but with time, I am powerless."

"You should have done it earlier."
"No shit. How does that help me, Nerd Jacobs? What can I do?"

"Well, you see, I do know of a special tool that can manipulate the time fold. The inventor said it is only for emergencies, and I suppose this is one." He says, pulling an egg shaped clock out of his desk drawer.

"I will put it in your terms: Imagine four bongs on the edge of your futon. Say a direct copy of the bong nearest you is sent to the back of the line of bongs and takes the place of the first bong. The formerly first bong becomes the second, the second becomes the third, and you take a huge rip off the forth. Time, you see, works the same way."

"What the fuck are you talking about?"

"Turn the arm to the left to go back, the right to go forward." He says, shaking his head.

Now, finally, you have a chance to get a paper.
Turn the arms and travel back in time
Throw the clock at Nerd Jacobs and swipe his paper