Forsberg Bulges the Twine With EelPuck!

Buy EelPuck Now!Did I start getting drunk already or did I really just read that scientists have wired an eel brain into a robotic hockey puck? No, 'tis truth and not the spirits mateys!

The cyborg is no RoboCop, but it is a revolutionary experiment in combining a mechanical device with living tissue. The robot is controlled by an immature lamprey eel brain that was removed, kept alive in a special solution and attached to the hockey-puck-sized robot by wires so it can receive signals from the device's electronic eyes and send commands to move the machine's wheels.

"Until the recent past, people were using biological nervous systems to inspire technology," said physiologist Sandro Mussa-Ivaldi of Northwestern University's Rehabilitation Institute of Chicago. "Now we've gone one step beyond, to tap into the nervous system itself."

Well damn, no RoboCop? I thought they were going to have EelPuck hitting the mean streets of Old Detroit, fighting crime and upholding the public trust! I assume the reason against this is that immature lamprey eels are too lawless to really be molded into effective crimefighters. Hell, I remember the infamous Eel Riots in Providence during 1994... they nearly flopped around trying to absorb oxygen through their gills until the entire city was destroyed!

What possible real world applications could sweet-sweet Sandro have in mind for his amazing EelPuck?

NHL Regulation EelPuck - Following on the heels of that incredibly sassy "comet trail puck" Fox tried, EelPuck will truly revolutionize the sport of professional hockey. Since EelPuck's lamprey brain is attracted to flashing lights, all that needs to be done is to dig up a bunch of pairs of those old British Knights shoes with the flashing light in the heel and modify them into ice skates. EelPuck will zip around the rink creating all manner of hijinx and add an entirely new dimension to the game!

Roach Rv - Roaches a problem? Just grab a paste stick and attach a roach motel to the top of EelPuck, then hang your disco ball to give it that random movement you're looking for. You'll find that this will work very well in attracting roaches, since like most men, cockroaches appreciate the thrill of the chase.

Milkshake Coaster - When weight loss is a real issue, just use EelPuck as a coaster for your girth-enhancing drinks and it will roll away, probably spilling the shake all over the place in the process. You might have to buy a lot of EelPucks, because unlike venomous piles of insane webmasters, they can't breathe milkshake.

Cat Frightener - Cats really love small objects that roll at them suddenly, and by "love" I mean "hate and want to destroy." Armor little ol' EelPuck up to protect the juicy lamprey brain from prying cat attacks and send him on his way! Your cat will really dig it when it's sound asleep and you hold a flashlight over its head so that the EelPuck drives at ramming speed into its face. Mission accomplished, EelPuck!

I Fancy Myself a Writer

I have always hoped to be more than just a half-assed source of humor, and I have always told myself that I have the skill to pull it off. Of everything I have written up until now, I only have a few passable short stories that I can point to as anything indicative of this. Roughly four or five weeks ago I began the long hard road of writing a novel. I'm not going to bore you to tears with it, or ask for constructive criticism because I am already aware that "I = fagot". 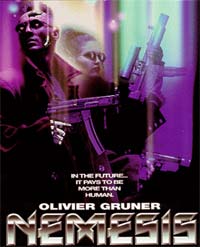 Oh hey, they already made a film adaptation of the novel I wrote in high school.This isn't my first go at writing a novel. My first attempt began in the sixth grade, and after two hundred hand-scrawled pages detailing a cyborg in a post-apocalypse future with some other garbage and giant robots, I gave up on it. During my freshman year in high school, I put my fingers to the keyboard and began my second attempt at a novel. This time I thought I had it nailed down, and since I can actually remember the second one (my 250 page draft was luckily lost in a hard drive crash), I am going to tell you all about it. You know, because you asked. Really.

The novel began with a character named Kart. Don't ask me why I named him that. I think I had a secret sexual fascination with go-karts. Naturally Kart was a bad ass mercenary, he had all manner of firearms, and I am fairly certain he was a cyborg, which is a great idea that I just couldn't let go of. The female character was named Sara, probably after some girl I had a crush on in high school, and she was also a cyberslut who could handle a gun.

These two characters were brought together by an evil Japanese businessman (because all Japanese businessmen are evil) who was in Egypt trying to unlock some ancient Egyptian evil (because everything from ancient Egypt is evil). Well the Japanese guy bought it and then somehow his search for ancient Egyptian evil caused an incredibly silly cataclysm. Not to copy off Lowtax's fine literary references, but this cataclysm can be best compared to the shutdown of the ghost containment unit in Ghostbusters. All manner of evil spirit and beast were flying through the air causing trouble and eating people. Oh yeah, and the evil Egyptian spirit energy turned the survivors into hideous mutant freaks. Evil hideous mutant freaks.

This began a fabulously entertaining ride of outrageous encounters and hysterically funny one-liners. This novel may have contained the highest number of classic quotable lines in history. Everyone has their own favorites, and mine was when Ray confronted his client-turned-love-interest Dana Barret (Sigourney Weaver) after she became possessed by an evil spirit that had taken over her building. Murray knocked on the door, and the usually conservative and demure Barret answered as a demonic, sensual sex-pot!

FABULOUSLY ENTERTAINING! Naturally Kart and Sara were the only two who could save the world because Kart had some weird power that made him get nose bleeds. I'm not making that up. Well, technically I did make it up, but I'm not making it up right now.

As bad as all this sounds, I'm not letting you in on the key selling point of my novel. If it had ever been published, I would have wanted the following truism printed as a guarantee in bold red lettering on the front cover next to the picture of the jet truck or mummy or whatever they put on the cover:

Naturally there wasn't a gun fight in every five page span, but averaged out, I am certain that guarantee would never allow someone to actually get their money back. I would have also included a lot more sex as a selling point, but I was not exactly a gigolo, and the one awkward sex scene I included played out like a retarded kid's finger-painting of "where babies come from." If I had managed to turn it into a sci-fi harlequin novel, I would have included a pop-down vagina and billed it as:

If this whole novel thing doesn't work out, I am pretty sure I can just learn Japanese and go script episodes of "Gundam Wing" or "Dragonball Z." If anything, I am overqualified for that position.