Derek Smart Explodes on the Scene 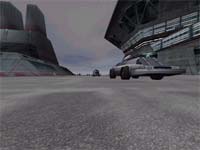 I have upgraded my battlecruiser with hydraulics, chain steering wheel and a 3000 AD crown shaped air freshener.Nothing gets me more excited than hearing that Derek "Cranium Overflow" Smart has released new BATTLECRUISER 700K 4D SCREENSHOTS! That's right folks, he has returned to the scene with a vengeance. I suppose the scene is some sort of homoerotic bathroom coke scene like they had at Studio 54, but whatever the scene is, he has arrived again with a vengeance. Marvel at his giant astronaut. Wonder at the pure angular power of his spaceships! They will destroy you because they exceed ninety degrees! Try that at home kids!

You would think someone who released screenshots of a game that has been in development for roughly five thousand years would have some sense of humility. BUT NOT DEREK SMART! Derek Smart knows that his game will be the best ever!

God help the competition, because its going to take a lot more than luck and a massive marketing blitz, to beat BCM.

Yeah, that's right Derek, it might take something like a playable demo or maybe an engine that renders on a system somewhere below a DoD supercomputer. Oh, hahaha, wait, yours is the only game that doesn't have a playable demo and requires a set of alien hardware (and I don't mean G4 you Mac freaks) to render! Have fun on the market, SUPER GENIUS!

I Was a Teenage Alcoholic

Actually no, not at all, well maybe…damn. I didn't have a drop to drink until I was 18 and then I showed up at college and drank like a fish. Call me a late bloomer, but I sure made up for it! Twenty beers in one night, endless games of "Quarters" and "Asshole"; I endlessly struggled to compensate for my missing out on the scene. I don't mean the Derek Smart scene, I mean the drinking scene. I have a number of incredibly lame drinking stories I could relate, stories that are probably similar to what you have personally experienced, but instead I will relate the night I shared with a friend and my ex-wife: "The Night of the Tussin." Notice the "ex" prefix before the whole "wife" thing? That represents misogyny. 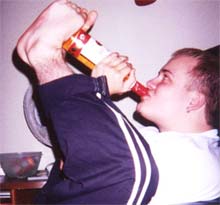 This is the kind of friend I have. No wonder I am drunk out of my mind three days a week.This was not just any night... my then-wife and I journeyed to Cincinnati to visit a few friends and a particular friend who was visiting from Tennessee by the name of R. (Rodriguez, Robert, whatever…) Adkins who decided to consume an entire bottle of Robitussin as a prelude to our night on the town. Several other friends were there and we enjoyed mass quantities of alcohol, but nothing to match the volatile bottle of Robitussin my friend had chugged before we left for the Tex-mex restaurant. We all had Margaritas as big as your torso, and like Mad Dog 20/20, they were fit for a kiiiiiing, but this still did not add up to a bottle of Robitussin. The recipe for my friend's downfall went something like this:

Mixing: Chug beers as quickly as possible, douse semi-authentic "just north of the border" food with massive margarita, top off with Robitussin.

For those of you who don't have a nice big bottle of Robitussin, you can replace the effects by simply standing in front of an overloaded 16-wheeler traveling at roughly 185 miles per hour. If you don't live near an interstate where trucks have rocket motors attached, have your friend hit you in the face with a shovel a minimum of ninety times.

We decided to attend the grand opening of strip club, and arrived to be impressed by the high caliber of the dancers present, and the fact that my good friend had become nearly catatonic.

Of course women aren't objects, I object to their objectification! Oh no, objectastrophe!Unlike many "showgirls", they were attractive and well rounded. Call me a cad but I am very judgmental when it comes to strippers. If you are willing to mount the stage nude you had better be very attractive and possess at least rudimentary motor skills, and miraculously, these women had checkmarks in both columns.

I purchased a lap dance for my good friend Mister Adkins, this requiring in the neighborhood of roughly one thousand slaps to the face before he would react (much to the horror of the stripper). When he did finally follow the dancer, he responded to her disrobing with an emphatic "you can't wake the dead honey" hissed through red-stained teeth. Shortly after returning to his seat, I noticed a particular gleam in my friend's eyes. This gleam did not mean "I want to see more nudity," it meant something along the lines of, "I want to kill god". In short order, my friend vomited on his chest, tossed two wooden chairs at a particularly unspectacular stripper while screaming something like "avast ye fucking landlubbers!" and got thrown out by tuxedo dressed bouncers while muttering a William Blake poem. "Tiger, tiger, vagina tight," or something along those lines.

We followed him to the car and he became more animated on the way home, rolling to and fro in the back seat screaming "I'm a strippah man!" and the accompanying "I'm a strippah!". Frankly, he is lucky that he didn't hit the dancing girl in the head with a chair and get arrested for assault. Believe it or not this eclipses the night where he rolled around on furniture in my apartment and then crawled between a mattress and a box spring and screamed while making the mattress "levitate".

The reason I relate all this to you is the impending night of debauchery this Saturday, on a scale never before seen. We have a liquor cabinet stocked with all of the following, and believe me, I consider this bragging of a pathetic nature: Bacardi 151, Vodka 151, Ketel One Vodka, Beefeater Gin (replacing our normal Tangueray) and literally dozens of schnapps, mixes and lesser alcohols (tequila, spiced rum, etc.), gasoline, kerosene, rubbing alcohol and all manner of fuel derivatives. I also think we have liquid oxygen somewhere in our liquor cabinet. That goes in a Hairy Buffalo, right?

Please relate to me any drinks you might have. I am willing to try anything because my ultimate goal is to introduce a supposedly attractive Asian girl to my "claw hammer" which is my nickname for my claw hammer. She can "respect the hammer" by going unconscious and possibly bleeding to death from internal hemorrhaging. God bless baby Jesus.

Jeff K has made his triumphant comeback to the Ask Jeff K tournament. No, I didn't realize there was a tournament either, but I guess people are competing to see how FUCKING STUPID THEY CAN BE BY E-MAILING HIM. Jeff, as always, responds with his usual aplomb.

USE TEH KEYBOARD NEXT TIEM TO TYPE AND MAYBE ILL UNDARSTAND YUO AND REPLY BUT UNTIL THEN GO DIG A DITCH AND BURRY YUORSELF IN TEH DITCH AND LIGHT THE DITCH ON FIRE because I dont haev enough tiem to figare out yuor nonsense words, cakeass.

I didn't include the user submitted e-mail in that because I feel confident you can use your imagination. The only limit is you, so hurry and ask Jeff K!