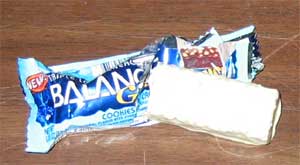 LABEL DESCRIPTION: Hooray! More capital letters! Keep 'em coming, barkeep, I'm a big boy! In one sense I feel sorry for the companies who produce energy bars, as they're competing with approximately 64,000 other corporations who are making the exact same things as them. In an effort to attract the most attention on the store shelves, these corporations have paid for a heap of scientific marketing research that informed them "using all capital letters = GOOD IDEA." Hey, here's an idea you guys: why don't you make an energy bar wrapper which emits a holographic series of images showing a naked woman fucking a cactus? That would get some attention! Or maybe a wrapper which shoots lasers beams into nearby consumers' eyes and blinds them with fantastic savings! If there was some possible way to make popup ads appear in real life situations, I'd suggest that scenario as well.

NUTRITIONAL FACTS: It's the standard 20-25% breakdown here, with nothing particularly exciting or noteworthy. This snack has 25% of your recommended Molybdenum requirements, so if you're looking to fulfill your daily Molybdenum needs, perhaps you should eat something else like... uh... the planet Mars or something. I don't know, what the hell is Molybdenum anyway? Wasn't he the guy who battled Superman that one time?

REVIEW: Before I actually taste this thing, let me describe the smell: try to imagine a used coffee filter covered in raisins that have been marinating in a fetid swamp of chlorine for a week. Then think of something significantly worse and you'll be able to get an idea of what this white brick of waste smells like. True enough to its name, this bar has "TRIPLE LAYERS." I'm guessing the first layer is sawdust, the second is stucco, and the third is some sort of manmade synthesized metal. Perhaps eating metal is good for you. Maybe it has a lot of Molybdenum in it. I really don't know.

During my valiant attempt to chew this wad of god-knows-what, some sort of exotic industrial acid covered my tongue and began eating away at the enamel in my teeth, so I think I can now file a worker's compensation claim. The second layer (the stucco) seems to be guilty of producing this disgusting taste, so all the blame should go to the engineering team who was in charge of layer #2. Please note that I did not even insinuate anywhere in this review that this energy bar tastes anything like cookies and creme. This is because I'm not a dirty rotten lying bastard asshole like the folks who run the Balance company.

AMOUNT OF ENERGY I RECEIVED FROM CONSUMING THIS: Not very much, certainly not anywhere near the amount I received from the heroin bar above. 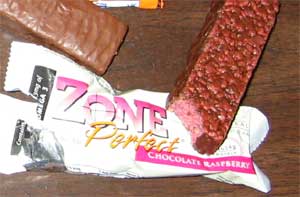 LABEL DESCRIPTION: Much like the previously reviewed ZONE Perfect APPLE CINNAMON energy bar, this came with an exciting three milligrams of "OMEGA 3." It was very refreshing and relieving to discover this important fact, as I have not knowingly ingested any "OMEGA 3" since the previous energy bar review, and my body was really starting to feel it. For example, my head was itching. If that's not a clear sign that I need more "OMEGA 3" in my diet, I'm not sure what is. I would like to point out that there is a crosshair drawn on the inside of the "O" in "ZONE," perhaps indicating that this energy bar is ideal for hunters and various folk who enjoy shooting animals with firearms. Besides the deer-killing crosshair, there isn't much exciting about the packaging on this energy bar. In fact, some of the font appears to be Times New Roman, so maybe the graphic artists who designed this ran out of energy during the creative process. Oh wouldn't that be ironic? Well, actually, I guess it wouldn't really be that ironic, so forget I even mentioned it.

NUTRITIONAL FACTS: This thing is just chock full o' good crap. 200% Vitamin C, 200% Vitamin B6, 210% Vitamin E... this thing has it all! For all you folks who were particularly worried about your Molybdenum intake, the ZONE Perfect CHOCOLATE RASPBERRY has a whopping 65% of whatever that is, so you can be sure that you're getting a whole boatload of Molybdenum when you consume one of these, assuming you are somehow able to repress your gag reflex long enough to choke it down and refuse to vomit up its remains all over your ceramic floor.

REVIEW: Once again, I'd like to address the stench emanating from this product before jumping into the taste review. Have you ever purchased a box of those generic "fancy" chocolate candies that rednecks across the world buy for their obese greasy lovers on Valentine's Day? They come in a fancy white box which displays the romantic phrase "MANUFACTURED IN TAIWAN" across the front in highly decorative letters. Each of these boxes contains at least one randomly-shaped candy which cannot be identified and emits a strange foreign odor when you pick it up. Usually somebody will open up the box, take a small bite from this candy, and immediately put it right back where they got it. Then you'll open up the lid, see the half-eaten candy, and wonder why the last person didn't just throw it away.

This energy bar is that candy. It gives off the same vaguely rancid odor as the infernal redneck knockoff candy, and even though it has a hell of a lot more Molybdenum than your standard Taiwanese chocolate lump, it's really not worth eating for any reason whatsoever. The good news is that this energy bar's stench is nothing compared to the horrible, horrible taste it contains. Wait, that's actually bad news. The interior of this taste treat is bright magenta colored, and I can't think of anything that says "boy howdy this shit tastes fucking great" like a neon red hue of color. Take a look at this: 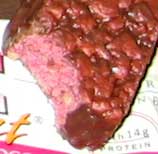 Technically it tastes like a raspberry, much in the same sense that technically the AMD K5 was a computer processor. I am refusing to eat another chunk from this disaster on the grounds that every bite destroys a piece of my soul and, quite frankly, I can't afford to give up any more of my immortal spirit since I've already lost so much of it by reading the Weekend Web. If you want to experience the sensation of eating a ZONE Perfect CHOCOLATE RASPBERRY energy bar without actually biting into one, purchase some raspberry Kool-Aid and make it by substituting vinegar for sugar. I don't know how much Molybdenum there is in vinegar, so don't ask.

AMOUNT OF ENERGY I RECEIVED FROM CONSUMING THIS: A significant amount since I immediately got up and ran to the toilet to spit it out. Before attempting to eat this mess, I didn't think I had enough spare energy to run such a great distance, but now I feel as if I could easily run a marathon if somebody was chasing me and threatening to make me eat a ZONE Perfect CHOCOLATE RASPBERRY bar.