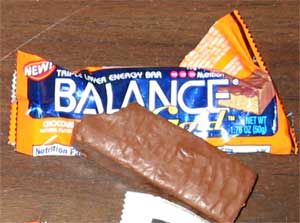 LABEL DESCRIPTION: Well it's yet another horrid BALANCE Gold bar, so the obligatory "40-30-30" series of pink circles are floating around up top next to the word "Nutrition" which is there to let you know that the makers of BALANCE Gold support the theory of writing the word "Nutrition" on their wrappers. The back of the candy bar flap says "BEST BY JULY 02, 2003," so I'd like to point out that not only am I risking my very life by eating a horrible energy bar, but I'm risking my life by eating a horrible energy bar which expired over three months ago. You may feel free to thank me by FedEx-ing rare jewels and precious metals to my house.

NUTRITIONAL FACTS: It's almost identical to every other BALANCE Gold bar reviewed here, so I'd simply be wasting space by listing them again, much like how the actual energy bar is wasting space inside the wrapper, which could better be used as a condom for some dopey African AIDS victims who really like fucking each other.

REVIEW: Well, the "PEANUT BUTTER" doesn't resemble something like peanut butter as much as it tastes like a paste mixed from peanut shells and cheap glue. Once again, my ass was kicked by the deadly second layer of pain, which I guess doesn't really make that much of a difference since layers one and three also taste like complete shit as well. I guess there's just some inherent fundamental problem when you're producing a candy bar that has two ultra-soft layers and a middle one which feels like you're trying to gnaw through a wet bed mattress. I'm assuming layer #1 is chocolate and layer #3 is the peanut butter, which leaves nothing but unanswered questions for layer #2. If you are eating a three layered "chocolate peanut butter" bar, and one layer is chocolate while another is peanut butter, what is the last layer supposed to be? I suppose the obvious answer here would be "Molybdenum," but since this rotting heap of slag only contains 25% of the recommended amount of this precious vitamin and / or element, I doubt this is a viable answer. If you want my educated opinion, and trust me you do, this fabled third layer is composed from the compressed souls of the damned who are writhing in eternal torment and unspeakable pain. It sure as hell tastes that way, and I doubt any scientist possesses the ability to convince me otherwise.

AMOUNT OF ENERGY I RECEIVED FROM CONSUMING THIS: After consuming two bites of the chocolate layer, peanut butter layer, and compressed souls of the damned who are writing in eternal torment and unspeakable pain layer, I instantly received enough energy to make me get up and begin drinking beer. I continued drinking beer until the taste of the TRIPLE LAYER ENERGY BAR BALANCE Gold CHOCOLATE PEANUT BUTTER left my mind along with my memories of my home address, phone number, and waist size. That's a tradeoff I'm willing to accept in this case.

Ugh. All in all, today was a very, very painful and disgusting day, even more than the days when I wake up and accidentally catch a glimpse of myself nude in the mirror. I'm not exactly sure why anybody would willingly spend copious amounts of money on these so-called "energy bars" when they could just buy a bottle of vitamins and chew on a railroad spike for free, but I suppose that's the beauty of capitalism. Or the beauty of Molybdenum; either way, I don't particularly care at this point. I'm just glad I have escaped this review with my life, and since I've eaten such tremendously healthy food, I now feel justified in heading over to McDonalds and grabbing a few deep fried McGriddle Bacon Bonanza Funnel Icing Platters. Stay tuned for my next update this Thursday when I'll eat dog bones and review them, an experience which I assume will be much more satisfying.