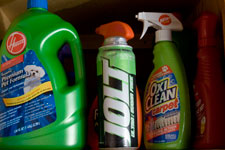 Ultra: Sugar Free - It is physically impossible for me to drink anything "sugar free" without getting a headache and fighting back the urge to vomit up pissed off white blood cells. Besides, sugar is essentially the healthiest ingredient in these bottles, so I'd be doing my entire body a major disservice by consuming this.

The Ultra: Sugar Free product information page doesn't help matters much with its description as, and I quote here, "ultra-tasty flava playa squashes calories, carbs and the competition!" Damn! I been looking for a flava playa, but this nigga's gone Atkin's! Yo shortie, hook me up wit a two-four of that shit and a pound of raw bacon!

I think I can safely make the following claims about Ultra: Sugar Free without actually drinking it:

1. It tastes like shit.
2. It makes your body feel as if you've been fucking a corroded car battery for several grueling weeks. 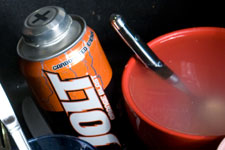 Orange Blast - Besides lemon, orange is probably the easiest artificial fruit flavor for Russian refugees to synthesize in illegal back alley flavor labs. Simply brew up a big vat of Octyl Acetate and pray the Department of Homeland Security doesn't bust you for messing around with a substance more vile than meth.

Orange Blast smells like orange Gatorade or virtually any other fake orange beverage in existence, which might help if you're trying to trick somebody into drinking it. "Hey Dave, why don't you take a swig of this crap?" you can ask somebody, assuming their name is "Dave" and the crap in question is Jolt Orange Blast. "It smells just like orange Gatorade, so how bad could it be?" Once Dave falls to the floor and into a coma, you may assume his identity and ruin his credit, up until the point somebody calls you Dave and dares you to drink something smelling like orange Gatorade. Welcome to the Energy Drink Möbius Strip, sucker!

While "Orange Blast" may sound like a vague racial slur against Muslims, the beverage itself tastes like that slimy goo used to remove price stickers from individual dinner plates. It's less carbonated than Cherry Bomb, but so is antifreeze and cat urine. If you like drinking antifreeze and cat urine, but have been bothered by their distinct lack of Guarana, perhaps you should either buy a few cans of Orange Blast or change your cat's diet to something more gay.

This concludes today's Energy Drink Roundup Spotlight. I didn't bother reviewing the "energy gum" and "energy shot" included in the package because my wife threatened to stop speaking to me if I consumed any more vitamin B (cobalamin is tearing our marriage apart). I eagerly anticipate more companies sending me free shit in exchange for calling them retarded because they don't know how to spell "Guarana" on their own website. That's like an automobile manufacturer bragging about the quality of their "stearing wheals."

Thank you, and may god bless all our messes.