Until this week, Jason X (the one set on a space station) was the only Friday the 13th movie I had ever seen. I simply had no time for your terrestrial Jasons. Now I have watched the first nine films. I have some thoughts. I also have one question: What the

Friday the 13th isn't what you'd expect. Jason isn't the killer. He doesn't even show up until the very end, and when he does he's just a waterlogged little kid with a smooshed head.

You know who does show up? Kevin Bacon. He's here to remove his shirt a few times and take a post-coitus arrow through the neck. And he's all out of shirts. 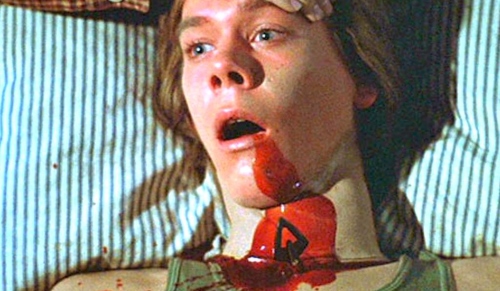 Friday the 13th Part II is the first movie to feature Jason chopping up idiot teens while wearing his iconic headwear. That's right, I'm talking about... 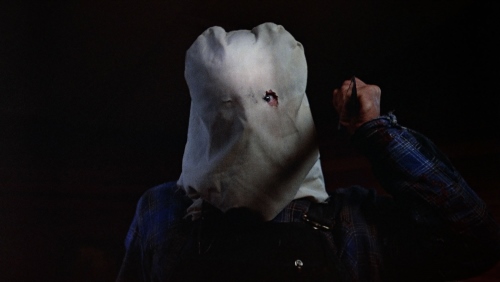 Friday the 13th Part III finally gives us Jason in a hockey mask. Near the end of the movie.

It also gives us a truly awkward scene with a biker lady checking out a barn, utterly fascinated. Her expression switches between amusement and downright awe as she meanders through this old-ass barn. She reaches out to touch all sorts of mundane rusty barn objects as though she is exploring the lost kingdom of El Dorado. 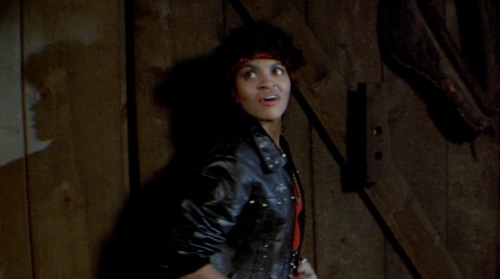 Fascinated Biker Lady is the best character in the entire series.

Friday the 13th: The Final Chapter includes a scene in which a man, who is being killed by Jason, accurately declares "He's killing me!" as Jason is killing him. This goes on for something like thirty seconds and features about twelve different "He's killing me!" line reads. Amazing.

A kid named Tommy (Corey Feldman) is established as a master sculptor of monster masks. At the end of this movie his sister fights off Jason to buy time while he does one of two things to confuse Jason:

1. Crafts a perfect monster mask to resemble young Jason
2. Shaves off most of his hair and rubs some mascara under his eyes

It's 2. The answer is 2. Look at this ridiculous shit. 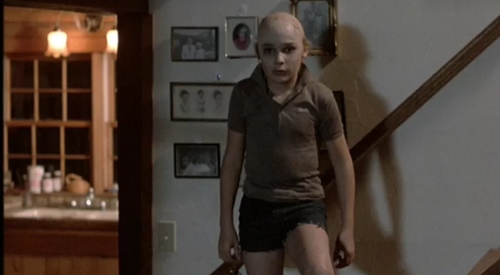 Somehow this works, and Billy brutally kills Jason in one of the most "Oh come on!" scenes in film history.

Wait. No Jason? Nope. Billy is in an institution, some random guy becomes a fake Jason, and at the end Billy decides to also become a fake Jason.

In a slight retcon, Billy never decided to also pretend to be Jason. Instead, he decided to be a hunky guy who accidentally wakes the real Jason up with lightning. It's a long story.

Friday the 13th Part VII: The New Blood asks: What if we just made a really bad Stephen King ripoff about a girl with telekinetic powers? And occasionally remembered to put Jason in there somewhere?

Actually, there is one redeeming moment. My favorite line of dialog in this god-forsaken series comes at the end of the film. As the survivors are carted away by paramedics a police office in the background calls dispatch. How does he convey the massacre that has taken place at this scene? By drawling, "We need four more guys."

Woah, chief. FOUR guys? This must be worse than the time that passenger plane crashed into the church and you called for three more guys.

Friday the 13th Part VIII: Jason Takes Manhattan was the wrong title for this movie. It should have been called Jason Spends 70 Minutes on a Boat Then 20 Minutes On a Dark Dock Then 10 Minutes In Some Sewers.

The highlight? In a pointless boxing match, Jason then punches a dude's head clean off. Into an open dumpster. At which point the lid slams shut.

Did you know that New York's sewers are purposely flooded with toxic waste every night at a set time? Well, Jason gets caught in this very real scheduled maintenance. It magically turns him into a normal boy with skin and a face.

Jason Goes to Hell: The Final Friday doesn't actually have much Jason. (Notice a recurring theme?) Instead, Jason's soul leaps from body to body doing murders in dumbass non-Jason bodies without a cool mask.

You know what? Let's forget about this movie. I'd rather end on a high note, with some actual lyrics from the Jason Takes Manhattan title song. May they inspire you and become the words you live by, as they have for me.

And there's no way you can fight, just show some respect, and try to survive!
On the darkest side!