I've always hated people smarter than I am. While most direct their anger towards evil historical figures like Hitler, Bin Laden, or Gargamel, I always felt a blazing hatred for the intellectual community. As far back as elementary school, I remember feeling intense malice towards those who got smiley faces on tests, while I received less pleasant grades such as the frowny face or the dreaded "doodie face", which depicted a stick figure of my teacher giving a stick figure of me a hot carl. While delightfully clever in retrospect, I could never appreciate the doodie face because it always meant severe beatings from the nuns (which was strange because I attended public school). As I got older, things stayed pretty similar. Instead of frowny faces and doodie faces, the teachers just wrote F or D, obviously too disappointed in me to even draw the stick figures.

Being a person of lower intelligence is a spiraling staircase to failure. Everything from car purchasing to car maintenance requires at least some sort brainpower far beyond my grasp. Even when dealing with women, I find my stupidity blocking my path. For an example, I recently stopped by my public library to rent some free movies. While there, I saw a cute girl quietly reading to herself. I thought I would easily win her affection... but the only thing I got was a card catalogue of humiliation!

Me: Hi, I'm Scott. I see you're reading a book. What a Dickensian coincidence, I too am reading said book, whatever it may be.

Her: Really? I love it... what do you think about the subtle undertones dropped by the author as he progressively uses metaphor and simile to express the deep tragedy felt by the characters?

It isn't like you can hide the fact that you're stupid either. Short of stamping a large, stupid red X on one's forehead, society does everything it can to push the unintelligent into the spotlight and metaphorically de-pants them. Often by actually de-pantsing a person. The last thing a stupid person wants is to be exposed for what they are. It's as humiliating as being a former child molester, or someone who owns an XFL shirt. We do try to conceal it though, hiding out in the best places we can think of. However, these hideouts are clearly labeled in big, bold, blue letters so that the stupid can find them without trouble. These hideouts are also called "White Castle" restaurants, and double as beacons for deliciousness.

How can you tell for sure if a person is stupid? There's a very simple formula: simply take Jeff Foxworthy's comedy routine and swipe out the word "Redneck" for the word "Stupid." Don't watch too much Jeff Foxworthy though, if you're exposed to more than 20 minutes of his act you are automatically considered a stupid, stupid idiot. If you're getting mixed signals, give the subject this fail-safe test on a piece of paper:

If the person circles yes, it is best to consider them stupid and dangerous. If they can't even read the paper, do not try to apprehend them yourself. Contact LeVar Burton immediately. 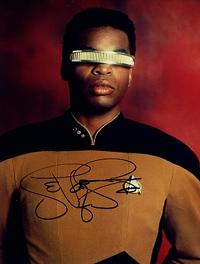 Obviously from the poor quality of his signature, reading and writing aren't as easy when you're BLIND.

My main problem is that - while watching other people succeed infuriates me - I have no real drive to put any effort into what I do. As an example, take a look at this essay I recently handed in:

That wasn't an excerpt, that was the report in its entirety. What's worse is that the assignment was given in a Spanish class. Worse still, I don't take a Spanish class. While I suppose I could throw my effort into studying and learning the material, I've instead chosen to find the easy way out.

It seems to me that I have only a few options to choose from:

Experimental Drugs: Drugs seem to be the answer to everything. If a kid acts up in class, simply dope him up on Ritalin and he'll be docile as a cow going to its gory slaughter. I'm sure if I search hard enough, I can find one of Mexico's many reputable labs and have them try their ungodly experiments on me. It's my hope that they'll stumble ass-backwards into some miracle cure for stupidity, thusly reducing my stupid rating by a factor of 5 or more. I figure the worst that can happen is rapid breast growth, in which case I will wear low-cut cleavage shirts and get through life on my looks alone.

Get a Tutor: Tutoring is a fairly good option for me because I figure when I'm one on one with a person, my mind wouldn't drift to thinking about what fun things I can stick forks into. I would definitely learn something, because most tutors I've seen are high school girls. This would almost definitely add new, interesting words to my meager vocabulary like "statutory" and "rape", and would most likely help my math skills as well when I learn how to count 5 to 10 years.

Watch Nothing but Children's Programming: "Today's episode is brought to you by the letter 'A'." One down. I figure about 25 more episodes and I'll be set. 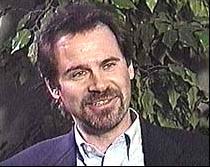 TV personalities like this do a valuable public service by encouraging people to read, instead of listening to their horrible, horrible acts.

Use Negative Reinforcement: While psychiatrists have found that negative reinforcement and punishment usually doesn't work, I'm too dull-witted to understand these findings. Thus, what they say has no bearing on how negative reinforcement will affect me. I'll simply hire a witty man like Dennis Miller to unleash his poisonous barbs of wit whenever I say or do something stupid. After he goes on and on for 40 minutes without me understanding a word, I assume that I would punch him in his jaw, and the pain in my hand will teach me a valuable lesson.

Death: Only when enveloped by the fantastic release of death can I truly be free of this idiocy prison! Sweet flames of my inevitable demise, embrace me!!

Being smart has all sorts of advantages I couldn't possibly understand! Like... um... hmm. Well, there's... er... OK, well just because I can't think of any doesn't mean they don't exist. It's like Santa Clause, or the Banana Splits. They're real, but just invisible. And dead. Then again, there are benefits to stupidity that - because of my stupidity - I've overlooked. I'm sure Garth Brooks and Tori Spelling would agree: stupidity pays! Hell, no one even likes these smart people anyway. Steven Hawking? Ha! Sure he can talk physics, but let's see him take on the Shaq attack one on one. Who'd be more popular then? Certainly not Professor Wheelio Von Polio, you can believe that. Hey, things are actually starting to look up for me. The world is fantastic through the eyes of an idiot! Me rest now. Grammar make me sleepy.