Internet Advertising and the American Revolution

As the seconds pass and turn into minutes, we eventually realize that these minutes are gradually turning into hours. Soon the hours transform into days, days which soon find themselves becoming weeks or maybe even fortnights. I don't know what the fortnights turn into because I don't know what the hell a fortnight is. I think it's one of those things people used to say back in the 1700's when America was declaring their independence from Britain. No wait, the British were declaring their independence from the Irish. I don't remember, but the important point is that somebody was trying to declare independence from somebody else, and this high pressure situation caused them to invent stupid words like "fortnight" in the process. By spontaneously spouting out goofy new words and phrases, the Americans used this tactic of verbal warfare to infect Britain with so much nonsense gibberish that King British would just give up and say, "fine, you want to do your own goofy religious stuff and not tax your own tea? Go right ahead, get in your dorky boats and crash your pasty white asses into Roanoke Island so you can all eat each other and watch your colony become lost." Of course we now know that the king was really stupid for saying such a thing since the Internet informs me that the Roanoke Island incident occurred in the 1500's, not the 1700's when everybody was busy declaring their independence. However, the residents of the 1700's (or 1500's for that matter) didn't have access to the Internet and had to invent silly new words instead of spending time downloading porn. This resulted in conversations like the following highly-factual chunk of dialogue:

VICE PRESIDENT OF BRITISHLAND: "Dear sir, how should we handle this situation with those deplorable Americans?"
KING BRITISH: "Those arrogant lads need to be taught a lesson! Bring in the American representative so I can reveal my new tariff to him!"
ENGLISH GUY: "Talley ho and gentle fortnights to you, dear swish! I was just displaying my Sunday face to the dear queen when my mentulated schvance caused her colostrum to turn your fellow daughters into Sapphic harlots!"
KING BRITISH: (Confused) "Well... um... I've called you in here to announce the new set of tariffs that I plan on imposing. I think you'll find them to be most cruel and unfair!"
ENGLISH GUY: "Well tipher the autocads, boatjerkeys, my penstiance has marloed the final wayans! Effentrics aside, this hugo will not gurette minstle's treehag!"
KING BRITISH: "JUST GET IN YOUR BOATS AND LEAVE ALREADY."

Although America broke off completely from Britain and later renamed itself "The United States," the damage was already done; Britain and England were soon knee-deep in raving nonsense slang that nobody could understand. Speech scholars, which are known as "talkingographers," tried to document the various slang phrases but were greeted by the hairy hand of failure slapping them across the face, as nobody in either Britain or England knew what the hell they were saying anyway. Most English slang is the equivalent of the blank tile in Scrabble; it's a wildcard that can be substituted for absolutely anything whatsoever, and it usually is. However, life is not Scrabble. You can't just waltz into my livingroom, start using the word "fortnight," and expect me to reward you with a triple word score. Instead I will probably shoot you in the face or at least cower in a menacing fashion. But this article is not about English slang; it's naturally about Internet advertising. 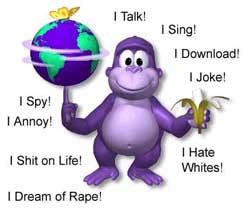 I've noticed that as the Internet moves on and continues to age in a linear fashion, it continually morphs into new and obnoxious forms of garbage designed to make us, the Internet users, turn off our computers and throw them into the ocean. Now I know that it's terribly clichéd of me to write something along the lines of "oh, the Internet was much better five years ago" since that's the type of thing only Star Wars fans and critics of this site say, but I can think back to a time when you could actually go from one site to another without running the risk of having your computer detonate from the stress of 40,000 Bonzi Buddy popup ads. In, oh I don't know, the past eight years or so, the Internet has metamorphasized from a barren, desolate, ad-unfriendly place to something which now elicits the same emotional response as getting drunk in Las Vegas and being run over by a convoy of taxi cabs covered with flashing advertisements for miniature spy cameras that allow you to monitor your wife or porch or wife's porch. As time progresses, Internet ads grow more obnoxious and tiresome while simultaneously generating exponentially less income for the people running them. Webmasters live in a failed environment, a world that is rapidly traveling into the sun, and nobody anywhere has any answers. In the meantime, everybody aboard is burning alive and looking for a way out.

Now I don't like to make sweeping generalizations, but everybody in the Internet ad industry is a retarded lump of rotting roadkill. Their solution to any problem is to "become more annoying." They completely gave up on generating revenue from the Internet around two years ago, about the same time that they realized old white guys would eventually stop giving them money in exchange for a 468x60 image that says "BUY OUR FEMININE HYGIENE PRODUCT" in giant Times New Roman type spammed across thousands of Sega emulation websites. Now most of us in this situation would take a step back and question if perhaps there was a fatal flaw in our advertising strategy, such as our ads being marketed to a demographic that doesn't have the appropriate sexual organs to use our product. But not the advertising industry! No way! They intelligently concluded that the flaw was inherent to the users of the Internet; we, as a whole, were conditioned to ignore blocks of 468x60 space. See, it was actually OUR fault that their advertising didn't work! They did everything correctly... it was US who fucked up! The ad industry then shrewdly began spitting out images that, instead of going horizontally, went VERTICALLY! Do you see the genius behind this? The ads used to go to the left and right, and then suddenly, bam, they started going up and down! What a crazy world! Somebody slap a lampshade onto my head and call me the life of the party, because I'm a feisty lad! Soon the vertical ad gave birth to the mini-vertical ad which sat under it and flashed constantly, and the mini-vertical ad spawned the random text ad which was inserted in the middle of content, and the random text ad belched out the "it looks like a Windows system message but it's really just an ad that looks like a system message" thing. As you might have noticed, none of this shit worked. Advertisers were still impervious to the fact that they could layer 50,000 ads on one page and they wouldn't receive one single goddamn click if the ads weren't targeted at a demographic that gave a shit about their crap. Nope, once again the problem was us Internet ingrates, the morons who could go to a page with a flashing "IF THIS BOX IS FLASHING THEN YOU'VE WON A FREE HOG!" ad and somehow inexplicably refuse to click on it. At that point they simply gave up and decided that if we weren't going to buy their products on the Internet, they would punish us into leaving the Internet completely. Enter the popup ad.

I remember back when the ad industry first began to formally introduce the obnoxious, obtrusive, pointless waste of space known as a popup. That was back during my Gamefan days, the time before I became the bitter, petty, whining fat guy I am today. Sure I was bitter, petty, and whining those days, but I was significantly less fat. I blame my weight gain on the ad industry, who probably blames it on you, so you're somehow responsible for me growing love handles the size of a car bumper. The webmasters who ran popups were mercilessly skewered by their readers who would write in with the most flame-filled emails ever. It was inexcusable for any self-respecting webmaster to use code that caused another window to expose itself! Of course back then webmasters occasionally got paid for running these ads, so at least one party benefited from them. Then the ad industry crashed even harder than it had crashed before, and the $20.00 CPM for popups went to $2.00, paving the way for where they lay today, a level so low that webmasters actually have to pay the ad companies for letting them run their pops.

These days popups are the norm; you'd be hard-pressed to hunt down a commercial website that doesn't automatically launch a new window advising you to download some spiffy new software that gives you instant weather updates, stock reports, and oh yeah it also sends your social security number and credit cards to a third party who changes their company's name every nine hours to elude the FBI. We've been so desensitized by the increasing annoyingness of the Internet that we've grown completely oblivious to how absolutely obnoxious Internet advertising has become. They've beaten us down to the point that they could physically come over to our homes and brand their company's logo on the foreheads of our loved ones and we wouldn't even flinch. The strategy these days is to annoy us into simply giving up and buying their product in the hopes that it will put a stop to the endless assault of ads, as opposed to purchasing their product because it's something we want or need. Webmasters aren't getting paid, Internet users are getting annoyed, and nobody is buying anything through such horribly infuriating ads. And through all this, we continue to inch closer to the sun.