GoldFacts: Worth Their Weight In... Gold 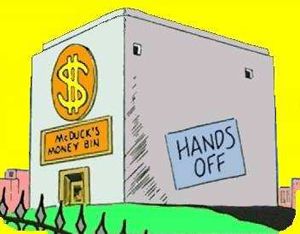 Even with the good-natured prodding of the National Gold Institute, you may still be a little wary about investing in gold. You’re probably also busy looking up ways to cook and eat yard mulch for your future life as a vagrant. Examine the facts about gold, and then decide for yourself. Or call us, and we’ll decide for you. 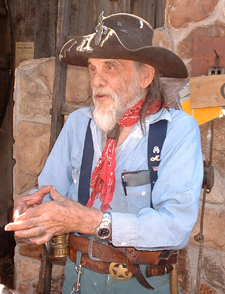 There you have it. You’d either have to be ignorant or a masochist to not invest in gold. And let me tell you, I’ve tried some kinky stuff, but I don’t see the appeal in nipple clamps when a simple slap in the face says all it needs to. That’s me; I’m all business. Also, if you’re still ignorant, heed the words of our founder, Dallas Fortworth. If he doesn’t get you to contact the National Gold Institute for your free starter kit, I’d venture to say that you deserve to be murdered. Hey, I don’t make the rules.

A Parting Message From Our Founder

Consarn it! Dadblast it! What the flim-flam is this brick-a-brack?! I don’t cotton much to moochers. If’n there’s one thing I don’t like, it’s dern claim jumpers! Ahh, so yer interested in gold? Well keep yer damned rotten hands off mine! I don’t care if that colored fella helped me find it! I reckon he found the end of my spade in his melon pert near uncomfortable. I’ll tell yas one thing, when yer scrabblin’ for pay dirt, ain’t no man yer pal. I slit more throats in sleeping bags than an Irishman. Lemme tell how I got to be where I am today. I know it’s excitin’ an all when ya strike, but fer the sake of the Lord, don’t take to running back to town screaming “GOLD!” at the top of yer fool lungs! If’n there one thing I hate to see, it’s dern fool prospectors who go loony as a mongoloid when they find somethin’. You tellin’ me I won’t be in a nearby tree, waitin’ to strike you down with a rifle? Don’t learn this lesson the way my pappy did. Now, someone wheel me to the goddamn day room!

For your free National Gold Institute Starter Kit, please write (and include one [1] gold nugget) to: