Little Blue Hat was hesitant. "I don't know..." she said. She looked up the long road ahead. Perhaps it would be faster ... but still something bothered her about it all.

"Didn't you say we'd drown underground in the rain before?" She called down the tunnel.

"And these are fields, and the road is straight. How would digging be faster than walking in a straight line?" asked Little Blue Hat.

"Ah, now that is a ... grr." The Worm began to wriggle vigorously in what Little Blue Hat could only guess was an emotional display of some kind. "All these questions are a waste of your time, now do you or don't you want a lift to the mine?"

"Hold on!" said Little Blue Hat with a spark of realization. "You have no eyes! How did you know my hat was blue?"

"What does it matter!?" fumed the worm, who began thrashing about madly. "Why do you care? Be quiet immediately, and CRAWL DOWN THERE!!!" 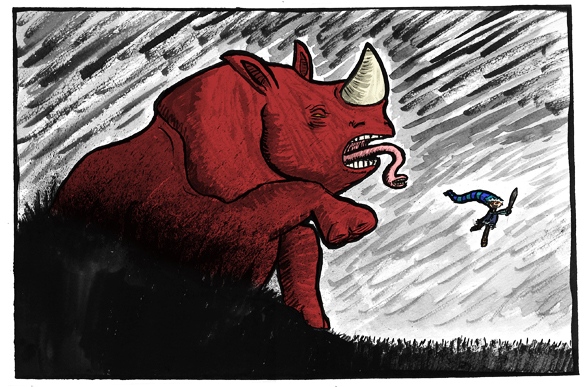 But Little Blue Hat had already figured out the conversational worm's game, and she pulled from her sheath the sword her grandmamma had given her when she returned from the previous crusade. Little Blue Hat nimbly hopped away as the ground around the worm's hole fissured and broke like a great crumbling cake, revealing a gigantic rhinoceros! Crazed foam flew from his enormous toothy maw, which was revealed as the true source of the "worm."

"NOW I WILL DEVOUR YOU WHOLE: BODY, MIND, AND EVEN SOUL!" bellowed the rhino's enchanted tongue. However, with his lure's ruse a failure and the element of surprise lost, the Rhino was no match for Little Blue Hat, who made quick work of the beast.

"Better to weather the weather unsheathed, eh Mr. Worm?" said Little Blue Hat as she replaced her sword. "You won't come so close to fooling me again".

And, true to her word, Little Blue Hat was never tricked by a colossal tunneling rhinoceros with a talking magic tongue ever again. For there was only one such beast that ever lived, and soon after the events of this tale the cult that worshiped it dissipated.

You can read more of Ian's writings regarding robots, ladies, and the strange weather of the North Indies here.