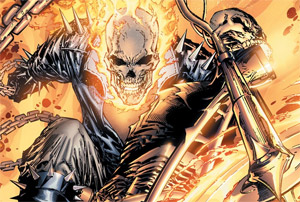 When I finally came out of the bathroom my bike was in the hallway and Mom and Dad were waiting for me at the kitchen table with a leftover plate of mac and cheese with hotdog buttons (my favorite at that age). They had a long talk with me about being a Ghost Rider. I'd heard variations on that talk since first grade. Dad was always warning me about projecting hellfire when I got angry or summoning a spectral motorcycle, but that stuff never happened. The skull was the first sign I might take after Dad and my two sisters and I was furious.

"If you embrace it you can learn to control it," said Dad.

"It can be tough, but your destiny is to be a Ghost Rider," said Mom.

What did she know? She wasn't even a Ghost Rider, she was just a regular woman that Dad rescued from hell after fighting a dragon made out of metal. Mom could never understand my pain.

"Diana has a boyfriend and Madison is in cheerleading," said Dad. "You can lead a normal life, you just need to be prepared and make time for your Ghost Riding. When the change comes you'll be a great--"

I couldn't bear another word. I ran upstairs to my room and slammed the door and threw myself into the understanding embrace of my stuffed animals. Tears rolled down fleshless cheeks. I had changed back to the skull again.

That afternoon with Brad was the first time my heritage intruded on my attempts to be a normal girl, but it would not be the last. For what remained of my childhood I fought an increasingly desperate battle to deny being a Ghost Rider.

I could fill a book with all the times I was embarrassed or humiliated by my uncontrolled transformations. There was prom night, when my dress changed into a leather jacket covered in spikes. There was the time I was flirting with Mr. Samuelson, the cute English teacher, and my libido somehow conjured a burning motorcycle to crash through the door and cast the entire classroom in the unearthly glow of its hellfire. I had to schedule my senior pictures like ten times because I kept having skull breakouts. Cramming for tests was hard because of all the dreams I'd have about being a bride of Zarathos, this creepy giant green skeleton entity Dad sold our souls to so he could save mom.

The Ghost Rider thing even messed my life up when it wasn't manifesting. I remember my first time in college with this guy, Lloyd, I spent our entire date at Crab Lobster touching my face over and over again to make sure everything was okay. When we finally did it in my dorm I couldn't enjoy myself because I was so worried my head would turn into a skull. I bet he thought I was kinky asking him to cover my face with a pillow every time we had sex. It took us eight weeks of dating before I showed my face in bed. Then we got in a fight over his MMO gaming and I projected a stream of hellfire into his computer.

That was it for me and Lloyd. You can't really continue with a relationship after you've used your powers in anger. As Batman famously said in those PSAs, "No matter how sorry you are, you can't take back a Batarang."

Mom and Dad didn't help. Mom would leave these passive aggressive notes telling me "Madison is overmatched against Sky Hitler. I really hope she doesn't get hurt battling his Terror Copters" or wondering "Have you thought what you would do if your father and I were decapitated by Brass Genie?" 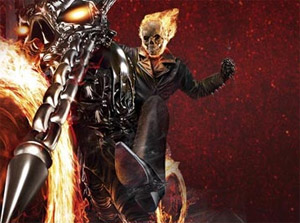 Dad, on the other hand, was relentless. He bought me leather jackets every year for Christmas and my birthday and any time he heard me complain about something he asked me if I had considered seeking supernatural vengeance. If I had a mean biology TA, failed a math exam, or just had a lunch served colder than I liked Dad would bring up the vengeance thing. I felt like I could barely talk to either of them.

Dad was also aggressively involved in my love life. He pressured me to settle down with every boy I dated for more than a week and not because he wanted me in a stable relationship. Oh, no, Dad wanted me to be so deeply in love that when one of his underworld pals killed my boyfriend and spread his guts all over my dorm or my apartment I would have no choice but to devote my life to seeking vengeance. I think he was joking when he would threaten that stuff.

When I wasn't dating somebody it was worse. There was always a new villain Dad wanted to introduce me to with some elaborate story of misdeeds. There was Cyber Pedro, the Alternate Hulk, some snake man named Danny, and an escaped hell demon that he referred to as Esteban the Bloody. He thought for sure I could date them and then need to hunt them down and send them to hell for being sleazebags. Sometimes he came at me with these stories I hardly even believed.

"Cob King," he said. "You remember that trip to Iowa when you were a little girl? I had to send Corn Lord back to the Third Circle. Well, Cob King was his son and he is taking over his father's high-fructose empire. They're working with the Pennsylvania Techno-Amish to turn America's inner-city kids into gluttonous fructose thralls. You'll love him."

"Tell Diana about it." My stock response was always to pawn these guys off on my sisters, who he had already convinced into the life of Ghost Riding.