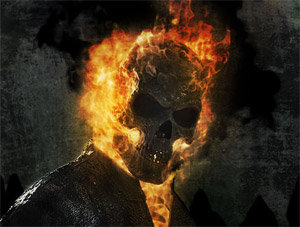 It took an extra year because of that incident with the mummy I won't go into here, it's all over the Internet, but I finally graduated from college with my degree. Helping animals was all that mattered to me. I joined one of those vet clinics that work out of a pet food chain. Paid the bills and I got to work with animals. Something still wasn't right though, I could feel it. I was still having those dreams the demonic being that owns my soul and I'd wake up with full burning skull head.

I tried throwing myself into my work, but I only found myself getting more distracted by sudden skull shifts and unintentional hellfire projections. Trust me, when you've got an iguana named Pedro open on the table so you can cut the dimes he swallowed out of his gut the last thing you need is a burning motorcycle crashing through the operating room doors.

That was when the puppy mill incident happened. We run into them occasionally. Animal control finds an unlicensed breeder with inhumane dog kennels and they round up all the animals. We have an open door on that sort of thing and run weekend adoptions to help the ASPCA. This one was real bad, a world-class sleazebag named Tad Snivelwhip was running a puppy mill practically like a chicken farm. There were dogs dead in cages with live dogs, starvation, overheating, lack of water, and physical abuse. The guy got out of jail on a technicality.

When I read Snivelwhip bragging in the paper how he was going to do it again I snapped. I threw the newspaper down in disgust and at that moment, in the Pets Planet break room, I realized my destiny. I allowed all of my anger about the mistreatment of animals to flow into my body. I felt so powerful. My skull started burning, my vet coat turned into a black leather jacket covered in spikes, and a flaming motorcycle burst through the break room door overturning the table and spilling Kathy's bento box.

"I have Dairy King gift certs I can give you to replace that!" I shouted as I revved my mystical motorcycle and zoomed out of the Pets Planet. All of the dogs receiving shampooing watched me roar past the Pampered Pet Grooming Center. I think I saw, in the black jellybeans of their eyes, a triumphant "Hell yeah!" and maybe a little "You go girl!"

I had to kill my way through Snivelwhip's henchmen. Lots of guidos yelling "yo" and shooting Uzis at me. There was a foreman with white hair and an eye patch who fought me with a katana sword and could disappear into shadows, but I grabbed him with a chain and dragged him up to the ceiling on my motorcycle. First time I ever choked a man to death. 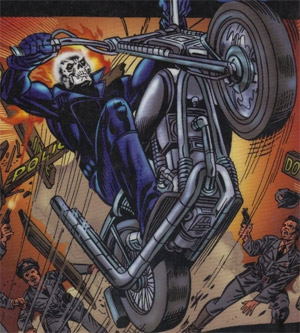 Snivelwhip was waiting for me in the condemned warehouse he was planning to turn into the state's second largest puppy mill. I scared his Ukrainian stripper nymphs away with a rev of my spectral engine and vaulted up the marble staircase to his luxurious office. He had an M-16 with a grenade launcher in his hands and stacked bottles of Shibu Inu semen on ice.

Really? That was my first Ghost Riding and even I knew an assault rifle was harmless. I let him shoot a full magazine into me and I opened a tunnel to hell.

It felt good throwing Snivelwhip into the abyss. As the demonic sphincter was closing I think I heard Dad, his distant voice echoing up from Satan's bowel, shouting, "I love you Meredith!"

I'm not afraid of what I am anymore. I'm not running from it. I've managed to find a way to live my life on my terms, be a veterinarian, have a healthy relationship, and Ghost Ride on my terms. It may not be the traditional way of a Ghost Rider, I may not fight the usual sort of villain, but I know I'm making my father proud.

Someday, after I am finally defeated by breast cancer or diabetes, when I am being flensed by Zarathos in the depths of his horror pits, I'll tell my father the truth: I was always proud of my Ghost Rider Dad.