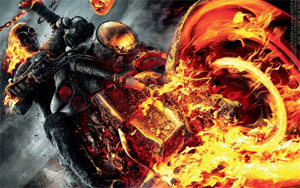 I was in college finishing my master's degree in veterinary medicine when Dad died. It came as a shock to everyone. It didn't seem possible. He'd been to hell so many times. Time travel, the moon, weird military bases; none of it really phased him. We were complacent I guess. Nobody even noticed the symptoms. Defeated by the greatest foe he'd ever faced: hypertension. How could a burning skull have a stroke? It didn't make biological sense. The doctor said he was driving up the side of a building when it happened, chasing after a corrupt politician who'd made his own bargain with the devil.

"If the stroke hadn't killed him, the fall would have been fatal," said the doctor.

"No," Mom said. "He once fell ten miles into the burning abyss. He is invulnerable to falls."

Diana, always closest to Dad, was inconsolable. She was working as a Ghost Rider in Detroit and she had to take the bus. She couldn't even stand to look at her motorcycle from hell, let alone conjure it. Madison left all these tearful phone messages, but she always avoids problems and so she never came. Not even to the funeral.

"I'm so sorry," Madison sobbed into the phone, "but a mutant super soldier has been killing prostitutes in Newark. These women need me to avenge them."

I couldn't blame her. She was always more comfortable with the act of being a Ghost Rider than living as one. I was struggling with the reality of Dad's death too. I remembered all those times I'd been mean to him. I became obsessed with the idea that the last time I talked to him I hung up the phone without saying goodbye. I imagined him hanging up that stupid football phone of his and sitting in his darkened garage, skull burning the blue-green it got when he forgot to take his antidepressants, wondering where he'd gone wrong with me. Wondering why I rejected him so totally.

Those days after Dad died are hazy, but I clearly recall Mom's strength. She made the funeral arrangements and each of us had our turn crying on her shoulder. That day at the viewing I don't think I saw her shed a single tear. He was in the casket looking like a normal man. Looking more alive than he had in years.

Dad's weird super hero friends were all there. I knew some of their normal alter-egos, but they showed up in full regalia. Even some of the villains he'd defeated. There was this guy that was like a giant head in a mechanical suit. He thanked Mom and said that if it weren't for Dad he'd still be designing robots to kill people, but now he designs robots to help the elderly and rescue people from fires.

Watching Mom stoically greet all these people and accept their condolences I realized she was as amazing as Dad. Even if her head didn't turn into a skull or burst into flames, even if she couldn't summon a spectral motorcycle with the raw power of vengeance, she was still a hero. 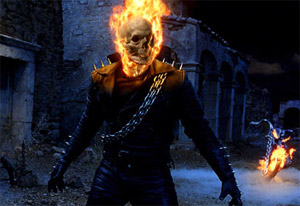 I helped her clean up the house after the wake cleared out. There was so much terrible food to wrap up and put away. Lots of birthday cake type stuff. Super heroes almost never die, and even when they do they tend to come back from the dead, so they don't know how to handle a wake. When it was finally done we sat together in the kitchen and had a beer. Dad's terrible domestics with the picture of the winged skull and BEER spelled out on the label.

"No, you don't. He could never tell you, but he was proud that you weren't a Ghost Rider. He understood how hard it was to deal with the flaming skull and all the rest of it while trying to put yourself through college to be a veterinarian. He really respected that."

"Oh, he knew what it was like. He had his hippie phase he went through where he was going to change the world. Lasted all of about a week before he got mad at some Nixon flunky and destroyed his car with hellfire. But he couldn't hack it. Not like you've managed. He always gave into that stuff and there's nothing wrong with it, but he knew there could have been so much more to life than just driving up the side of a cliff to kill a devil centipede."