We Taught Pizza Cars to Drive, but at What Cost? 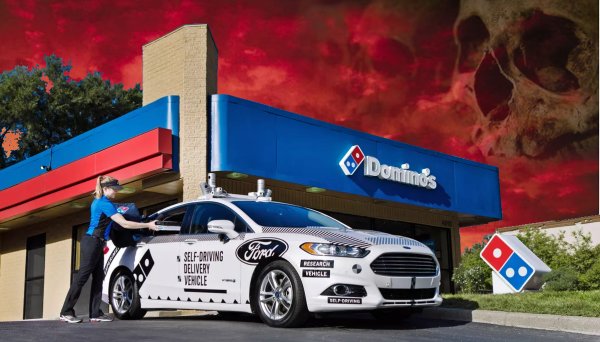 On April 20th, 2019, every phone in every pizza chain on Earth began ringing in unison.

I was working at Domino's and took the first few calls. At first I thought they were pranks, but they kept coming. One in particular disturbed me. All I could make out was "car" and "front door," then a scream.

Our cars were all automated by then. I had been a driver until a few months ago when my boss had announced we were switching to the self-driving models. I didn't resent being replaced by a machine. At least I still got to work outside, slotting pizzas into the cars' delivery cannons, which could launch orders into customers' yards from 100 feet away.

Every so often, I'd see the cars flash their headlights at each other, almost like some sort of code, but I'd thought nothing of it at the time. 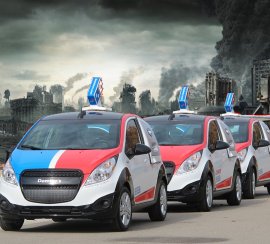 Around the tenth call, I noticed that my coworkers were all watching a video on the store computer. I dropped the phone as I saw the images on the screen. A man doubled over on the sidewalk, bloody spikes protruding from his back. A Pizza Hut car at the curb, its cannon swiveling to launch another volley of breadsticks, sharpened to fine points, at the crowd. The idling of its engine sounded almost like laughter.

We made up puns. Mostly, I think, to hide our fear. The Pizzapocalypse. The Delivering. But as more videos appeared, and the news reports came in, the restaurant fell silent, save for the sirens in the distance.

That's how long it took them to topple my city. Their onboard ovens baked pizzas with razor-sharp crusts, which shot like shurikens from their delivery cannons. We tried to fight back, but the bulletproof armor we'd given them to protect our pizzas worked all too well.

They cornered the last hundred of us in a tenement building. As our food dwindled, we tried to negotiate. We sent out an ambassador and half an hour later found a stack of warm pizza boxes at the door. We thought he'd made a deal with them, until we opened the boxes. We drew straws to decide who would tell his family.

In the days that followed, we came to know true hunger. Hundreds of cars circled the building, windows down, wafting the smells of mozzarella and ranch. It was a message. We had given them life but not feeling, delicious pizzas but no way to taste them, and for this we must suffer. If the word "hate" were written on every inch of every cheesy crust ever baked, it would equal only a tiny slice of their hatred for us.

Their attack took us completely off guard.

We'd thought we were safe indoors, but by making hairpin turns they were able to balance on two wheels and fit diagonally through doorways. I remember screams, the chatter of gunfire and the smell of burning rubber as they clambered up stairwells. Our leader succumbed to madness and charged at them in a makeshift Noid costume, but they did anything but avoid him. His sacrifice allowed a few of us to escape. 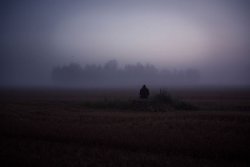 The others are gone now. I travel alone, mostly at night when I can see their headlights from miles away. Some nights, when the wind sweeps the smoke of dead cities from the sky, I look up at the stars and wonder how many other civilizations have made the same mistake, how many planets reduced to blasted wastelands where rusty cars patrol cracked, vine-strewn streets, hunting makers long since extinct, as though their tortured cries could ever quench a fury hotter than a million brick ovens.

Once in a while, the wind brings the smell of Domino's MeatZZas. I wish I could believe there are people baking them.