After years of nervous anticipation, the NASA New Horizons mission has successfully snapped pictures of our solar system's farthest planet. It is the first time in a generation that we have been treated to a view of a new planet in our solar system. Although scientists don't even call it that anymore. And really only one photo showed any detail. And it was detail of mountains on an airless planet so far away that no descendant of any human alive on this planet will ever see them firsthand.

"It's a very exciting moment," explained New Horizons team leader Dr. Helen Beefsquart as slides appeared to show a blurry picture of Mars. "We think it's exciting. We're not 100% on that word yet."

"In the next few hours, we expect detailed and exciting images of the surface," added NASA scientist Dr. A.J. Manderlay, who was proved objectively incorrect hours later when the New Horizons probe returned a single, stucco-like image that might as well have been generated by a computer. 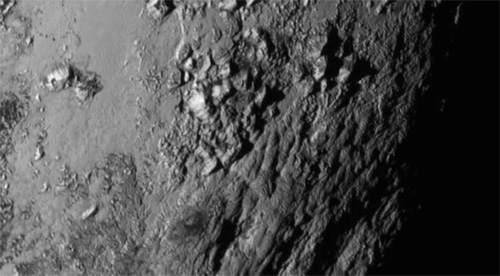 NASA, with the New Horizons mission to Pluto, hopes to inspire a new generation of young dreamers to imagine faraway places very much like here, but much worse and more boring. NASA also hopes to finally uncover the meaning of the word "exciting."

"It's not going to be made out of diamonds," said Dr. Manderlay. "Gravity isn't super reversed there and we're not going to see any monuments from ancient precursor races. No crashed spaceships. Not even like a fish or a horse. That would be really exciting. I can confirm that with my nephew. But I think this is still going to be exciting."

NASA has also ruled out seeing robots, wormholes or giant amoebas. They have also decided not to fire any missiles from the New Horizons spacecraft just to see what happens. 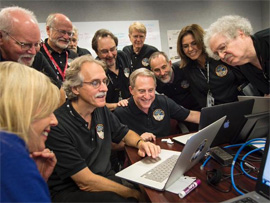 The New Horizons team gathers to receive early data from dictionary.com on the meaining of "exciting.""Exciting," said Dr. Beefsquart on Twitter. "Not compared to the trailer for Star Wars, or a GoPro of a girl surfing, or a drone flying over New Jersey, or really any Google Maps image you could call up on your phone, but, you know, for rocks that no one has ever seen before. We think this is exciting."

Many hope the New Horizons mission will inspire a new generation of students to think of space as a boring place adults lie about to try to make everyone care. As if the government just spent $700 million trying to convince them that going to their uncle's house boat will be more fun than playing video games all weekend.

Cheers could be heard from Mission Control when the probe successfully recorded a ten-pixel blob of Pluto's moon Hydra.

"Each pixel is two miles," explained a scientist who would pass out if he saw a Mario sprite. "So Hydra is about 25 miles across. Isn't that exciting? Do you know? I feel like it is." 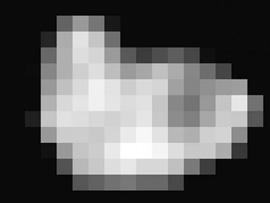 NASA scientists were excited by this photograph of Pluto's moon. That gives you a baseline for the misunderstandings we are facing with NASA scientists."Pluto is rocky and airless," explained mission air and rock expert Dr. Jack Jams. "We have some really exciting photographs now to confirm the presence of rocks and not air."

"There might be water ice on it," said an ice scientist who has seen water ice on dozens of planets and asteroids. Water ice is one of the things that makes drinks good. It also means there might have been liquid water on Pluto at some point, maybe billions of years ago, or never. Probably never. She continued to add, "This is very exciting."

Finally, the NASA head of mission control, Dr. Tom Hanksman, promised, "More exciting developments to come as we process the data we are receiving."

This data might include more images of rocks, possibly images of craters, ice and the news that Pluto has tectonic activity; information which many at NASA believe will prove exciting. Though they concede, they are still trying to figure out that word.