NHL, you've honestly cancelled a portion of your season because of a disagreement over 10ish percent of revenue? Are you serious? Roger Goodell loses more than that in his car's cup holder. You aren't even a real league. That much revenue is what? A frequent customer card from Tim Horton's, a handful of arcade tokens, and an aged IOU 1 Backrub from Ovetchkin? Once you're done divvying it up between all the whiney babies, you end up with a packet of Fancy Ketchup and a sweaty Russian wanting to rub his clammy hands all over you.

Do you even know what people think? Telling someone about the NHL lockout is like telling them their childhood tree house just fell and crushed an old lady. "Wait," they say, "that thing was still around?" It's hard to convince people to care about your sport when the last time they saw a game the puck had a flashing pink trail as it darted across their 17 inch CRT.

Luckily you're so turtled up in Full Nerd Denial to even notice. Like the Magic the Gathering player who says he's abstinent by choice, you've gone on and cancelled a season no one cares about. Yeah, you're in control here. So let the NBA and NFL go waste time and energy being popular (ugh!), exciting (blah!), and profitable (phlart!) while you sit around and squabble like two 16 year olds fighting over which Linux version to boot.

And what's worse is that you selfish assholes don't even realize what you're doing to your die hard fans. Yes, they exist. They're easy to spot: white, possess little high skilled jobs, and live in cities often described as "industrial", "cold", "crime ridden", or "an urban blight festering in the portion of the U.S. best suited for a nuclear firestorm." So while you fight over paper route money, your fans are empty. After Romney lost, hockey was all they had left. The last pillars of denial and imagined racial self importance came crashing down fast.

So, NHL, just to be clear, you're pretty much responsible for every spouse found dead in a trailer park from now until the Philadelphia Flyers skate again.

There is good news. Kind of. Things literally couldn't get worse. As far as rock bottoms go, you've been hovering between Junky Shooting up in Eyes and Christianmingle.com Hookups. Your last overly dramatic lockout (a pathetic 8 years ago) caused you to lose everything. When you resurfaced the next season still messed up and reeling from rehab, the only channel that would touch your spoiled, limping garbage was OLN. Your once proud sport shoved between bass fishing and How-To guides on turkey calls. Maybe NBC would play a game if horseracing was on break. And since you've come back, watching a hockey game is like peeking into a time capsule to the 1990s when you were relevant and Jagr's mullet ran free. 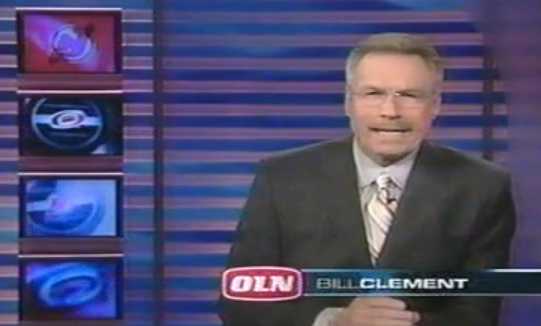 It looks like it's been run through about seven instagram filters to give it that ironic grimy vintage look. But no. That's just what hockey looks like now a days.

So at least you can't shoot yourself in the foot since you severed the leg years ago. Congrats. There is no darkness left. You're there already. Nothing is worse. No O Network, no G4 late night programming. If Verses kicks your pathetic act to the curb, your only chance are in self shot Youtube webisodes of three dads squatting beside a dumpster rattling off Swedish names into the voicemail of their apathetic step-sons. So good luck with that.

But you know what. Cheer up. I have faith. If anyone can climb out of this hole, you can. Hockey is itself less of a sport and more of making the best of a shitty situation. No one would skate with sticks in sweaters if they didn't have to. When life gives you lemons, you punch someone's teeth in and sit in a penalty box for two minutes. It's the Canadian Way and it's the kind of determination that'll get you through this. Just push on, work hard, and don't do something idiotic like put an ice hockey team in Phoenix. Oh...Welp.