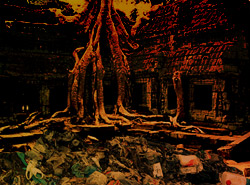 Nils Odegaard and Beauregard Ink are at this very moment joined in a predicament by their guide, DeShaun Vondel of Panther Army. Their attempt to reach Madison Square Aerodrome via the underworld of York has run afoul of the gang of futility-addicts called the Dolorists. Nils has unwittingly communicated to them his private shame about a recent encounter with the woman of tin. The travelers have realized, too late, that the Dolorists worship this mechanical maiden for reasons unknown.

Now they are being taken to her.

"The world is blind to your pain!" The Dolorists moan.

For Nils, Beauregard, and DeShaun the journey has become a breathless, stumbling effort just to stay on their feet as they are swept along by the press of Dolorists. The gloomy fiends barrage them with a chorus of personal and universal suffering, maddening maxims, and intolerable truths of the cosmic reality. The travelers try not to listen as they are drawn deeper and deeper into the rooted fastness of Treetown, amid the crumbling boulevards and wagon-rutted streets of bygone America.

"The reality of death renders all actions without meaning!" The Dolorists moan.

Nils scoops up a Nutty Toast wrapper and scribbles out a note to his love back in England. Beauregard, being of smaller frame and lesser constitution than his Viking companion, can do little other than avoid being crushed by the weight of bodies. DeShaun, who alone knows the true depravity of the Dolorists, fights wildly with punches and kicks, but to no avail.

"The violence of life fills your cup, death empties it out!" The Dolorists moan.

The roots of the trees grow thicker and reach down to the street. In places the roots penetrate the forlorn cobblestones. They become like the fibrous bars of some great jail or the mechanism of a sorting machine. Beauregard briefly loses sight of Nils and DeShaun. He cries out in panic, but his words are lost in the loud chanting of the Dolorists. They are separating and then coming together in groups as the thick roots permit, gradually pulling the travelers into a dark, arched tunnel made from the roots.

"Everyone you know and love will suffer and perish! The only escape is to die in the womb!" The Dolorists moan.

Here and there the Dolorists break into personal chants. They describe living to old age without loving another or the lonely death of a favorite pet in a deep well. Their morbid tales come in sobs and fits and they are all wracked with tears and hysterical laughter. The sound of the Dolorists is deadened by cellulous walls of the tunnel. Their morose canto begins to assume the rhythm of a distant throb Nils and Beauregard can feel through their shoes.

"The wind will steal...the names from graves. The earth will crush...our bones to coal." The Dolorists sing.

DeShaun becomes even more fearful than before. He brushes against Nils, his eyes-wide and his face covered in sweat. He shouts that they are being taken to the City Heart. It is the great boiling terminus of the forgotten lines, where the ancient steam engine that once governed life in York still beats. It is maintained and stoked by the Dolorists for unknown reasons.

"A million love letters never answered. A billion useless deathbed prayers. We drift on a miserable river called life and drowning is our only fate." The Dolorists sing in monotone, their voices dead and beautiful.

Nils and Beauregard feel the hypnotic power of the Dolorist's droning dirge. DeShaun even mouths a few words in unison with the now-marching mass of Dolorists before he realizes what he is doing. The dreadful beat of the City Heart grows louder and louder. The air becomes heated and stifling. It reminds Nils of Icelandic volcanism. Beauregard recalls adventuring for Her Majesty into a benighted jungle where savage pygmies devoured human flesh. DeShaun knows all too well the chamber of the City Heart, for once - briefly - Panther Army's masked warriors reclaimed the ancient mechanism from the Dolorists.

"We dream of dogs we used to call, of cats that used to fill our laps. We put their broken bodies to rest, but we could not tell them why. Man alone lives to know what it means to die!" The Dolorists sing, their voices wracked with agony.

The hunched and sobbing Dolorists are indistinguishable from the fog that fills the tunnel. Their song is less now than the drumbeat of the City Heart. Beauregard and Nils know they cannot stand much more. At that very moment, the throng stops. The Dolorists rock from foot to foot with the precision timing of a military parade, their bodies totally enslaved by the beat of the City Heart.

"We are man. We are woman. We are the fading echo of a scream and nothing more," the Dolorists intone.

The fog parts to reveal a vast double-door carved from golden wood. Above the hinged door is a placard which welcomes visitors to "The Palace of Wisdom." There is a powerful thump as a lock disengages and then a loud, elongated groan as the wooden halves of the door swing away from the Dolorists. The door collides not with the fibrous walls of further root tunnels, but with the glistening white tiles of some ancient structure.

The throng marches into The Palace of Wisdom. Nils and Beauregard wonder at the ornate carvings on the immense door. The door is images of hypodermic needles, strange underground train cars, nude women, and some of the electrified musical instruments the Americans seem to prefer. There is no time for Nils or Beauregard to decipher the meaning of these strange symbols before they are swept on by the Dolorists.