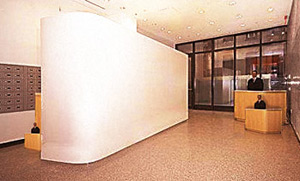 The lobby of the Old Hebrew Club is guarded by seven front desk clerks. Two of them are of normal human size, three are the size of a child or midget, and two are the size of a small dog. They are known collectively as The Brothers Abramovicz. Almost as rare as their unusual range of heights is that they are Polish Hebrews, a breed of men that mysteriously nearly became extinct in the 1950s. This mysterious mass-vanishing took place during the time of the Austro-Hungarian blackness that enveloped much of the continent. It was a time so dismal that it is not spoken of in public by any men of culture and tact.

The Brothers Abramovicz give the long eye to the sodden trio of Nils, Beauregard, and DeShaun. The brothers strenuously object to the sopping intrusion in unison, with the exception of Jon Abramovicz, the smallest of the brothers, who is no longer on speaking terms with five of his six siblings. He buzzes Nils, Beauregard, and DeShaun through the double security door and they gratefully stumble past.

The Wilbaum apartment is situated on the fifth floor. After three long presses of the doorbell a very stout and very elderly woman wearing a blonde wig and eyeglasses opens the door. She is immediately put off by the slovenly appearance of the travelers. Beauregard tries to persuade her to let them in, but the she insists on closing and locking the door while she gets her husband.

Many minutes later the door unlocks and opens once again and an equally old and stoop-shouldered man with a wild head of gray hair greets them with irritation.

"What? What? You want an autograph? I've got no time for this!" Dr. Wildbaum waves at them dismissively.

He listens with interest as Beauregard explains their predicament in summary. When he mentions the need to construct a level 10 electric computer. Dr. Wildbaum scoffs.

"Level 10? I can count how many of those there are on one hand. You're going to make one yourself, with no experience?"

Beauregard points out that Dr. Wildbaum would be the one making it in their hypothetical. Nils interjects to remind the doctor that their lives are in grave danger.

"Alright," Dr. Wildbaum says at last. "Alright, I will help you. But it won't be easy."

The elderly man turns back to his wife.

"Helen, pack my thermos with tomato soup and make me some sandwiches."

"Where are you going?" demands Mrs. Wildbaum.

"Helen, I'm going on an adventure," he replies.

She does not seem to appreciate this answer and has an earful for each of them delivered while she is making corned beef sandwiches for all three men. When she is finished she hands the wax-wrapped triangles to each of the travelers and wishes them well.

"What else is he going to do with himself?" She says, resigned to her husband's participation in the adventure. "I'll be fine, Mort. You have fun with your new friends."

The Brothers Abramovicz are waiting to ambush the trio as they exit. When they see Dr. Wildbaum has joined the party the fight disappears from their demeanor. The largest brother, Israel Abramovicz, even holds the door open for the men as they depart.

Beauregard quickly brings Penelope up to speed on the expedition's lack of progress and the new objective. Nils feels a thrill when he hears her voice, but he says nothing to betray his feelings.

"An Alpus? My god," Mort remarks as he struggles to sit comfortably in the back. "I remember my father driving one. It was sort of a milky orange color. I think a '56 two door. You had to put this awful rosin on the engine and-"

Nils passes a bar of rosin back to Dr. Wildbaum and the old man laughs. The Alpus starts reluctantly and grinds gears before zipping into the heavy traffic of New York City. There is a loud blare of horns and the tiny auto is nearly pulled under the wheels of a rusty Embarcovan.

The expedition is undeterred.