Some three decades ago a man named Rod MacArthur changed the course of human history. Rod, a relic hunter and skilled forger of false idols, decided to start a company. Soon his enterprise grew into an empire, churning out graven images and demonic artifacts day and night.

Some of these artifacts appear benign and harmless. A silly Christmas ornament here, a little plaque there. The vast majority of the merchandise is, however, far too bizarre to be from this world. No, it has to come from somewhere else, like an alternate reality where everyone is 100% retarded.

Rod called his company the Bradford Exchange. They rub a wet sponge across America's porous surface, sucking up every bit of grease and grime before squeezing it out and selling it back. They stick the Pope on dinner plates, Elvis on lampshades, and make eagles have sex with each other while wolves watch.

I'll tell you something else about Rod MacArthur: he planned 9/11. Ok, maybe that last bit was a lie. Still, his company is committing some pretty horrific crimes against humanity on a daily basis. Let's take a look at some recent transgressions, shall we? 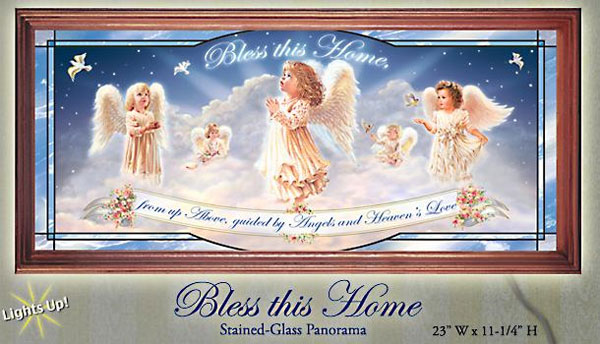 Ah, the new homeowner. You just bought a big house, probably from one of those reckless families responsible for ruining the American economy. Naturally, your new home is damned to Hell.

Lucky for you there's a quick fix. The easiest way to shake off an unwanted damnation is to buy a painting not unlike this one, which features a bunch of dead little girls floating on clouds. These adorable little angels from Heaven's dead child district work 24/7 praying for houses that carry their official décor. With one of these babies on your walls, it's pretty much impossible for your house to burn down, get hit by a tornado, flood, or end up in the part of California that breaks off into the ocean and gets turned into a giant prison.

Best of all, you can spend hours contemplating the exact causes of death for each little angel. I'm pretty sure the one on the far left got trapped in a refrigerator.

In case you're wondering about those birds flying around: no, they aren't dead. If they were, they'd have an extra set of wings. 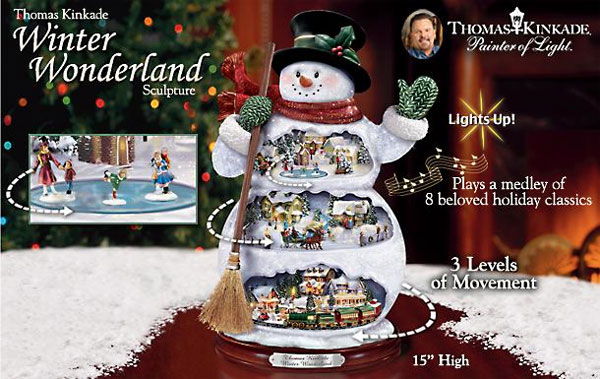 The Painter of LIGHTLet's establish one important fact: Thomas Kinkade is just a big ol' faggot. I realize some of you may find that term offensive, but I believe it most accurately describes Thomas Kinkade. No, he's probably not gay, and anyway that's not even what I mean. Just look at that guy. Yep, a big ol' faggot.

This is a snowman with its front melted open revealing three separate Christmas scenes where vital organs would normally go. Instead of seeing this poor guy's heart, lungs, kidneys, spleen, liver, intestines, colon, and so on, you're seeing little houses, horses, and trains. What the hell kind of deranged mind thinks of something like that? It's way too nightmarish a concept to work as a legitimate decoration.

Now I realize that at this point Thomas Kinkade is just a brand name, like Tom Clancy or Jimmy Dean, and he little to do with any of the products that bear his name. He probably doesn't know this bizarre thing exists. He's way too busy painting superfluous chimneys on rustic cottages or dreaming up new, exotic locations to stick lighthouses. But still, you'd think someone in his entourage would look at this bizarre "Anatomy of Christmas" figurine and say, "That's pretty fucking weird, man."

Also, feast your peepers on that face. Sure it's smiling, but look at those sorrowful eyes. It's clearly in a great deal of pain.