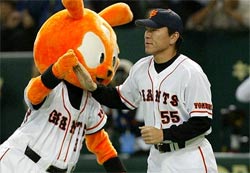 Inferior Yomiuri Giants are most popular and worst team in Japan. I hope for them to have a death. Otose! Ha ha ha, welcome to Ortu-matu American Besuboru! I am Hideo Hirayama, but you can call me JOHNNY BASEBALL! Otose! Yeah, ha ha. Alright.

Biggest talk of American Besuboru is of course American WORLD SERIES! Japan is not invited to competition because it is named that after newspaper, not after whole world. Ha ha, I know, I wondered about that for many years. It's okay, America makes rules because America is number one in baseball. Number two is Japan and after that is Dominican Republic of Sammy Sosa.

American WORLD SERIES is over! People still can't believe that Little Caesar's Pizza Tigers have not risen to challenges and defeated their hated foes the Southwest Bank Cardinals from Saint Louis, only American city so large it takes up two states.

The scene is Comerica Kyujo, the celebrated Southwest Bank Cardinals are fielding rookie pitcher Anthony Reyes and he is on fire! He is pitching. Look at those pitches! Suree sutoraikku! Again and again, suree sutoraikku! Bad day for you Tiger-chan! Rookie Tigers pitcher Justin Verlander is doing okay, but he is no match for Cardinals offense. Boom! Game one is over! Cardinals win!

Ha ha ha! Game two and Tiger-chan is bringing all of the tricks to the field. Pitcher Kenny Rogers who is not, after investigation, American rock and roll star Kenny Rogers, has illegal substance on his palm. Take a look at that, it looks like grasshopper spit in my book:

What do you know, the dirty tricks pay off. In this baseball fan's opinion the Tigers have dishonored good name of Little Caesar's Pizza with this stunt and I am very disappointed. Kenny Rogers was On the Road Again like the rock and roll song and he had to wash it off, but still the stunt has demoralized baseball everywhere. Horrified tears filled the eyes of children and men jumped to their death from highest bridges. Game two victory to Tigers and I need a Biiru. 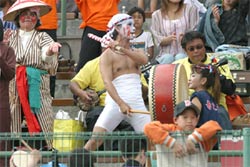 Game four with Sean Casey from Tigers gets ho-muran! What a sight. This gives Tigers early lead in game, but they forget Wa and suffer the consequences. Star player in this game is Cardinal's So Taguchi, who is master of Wa from Orix BlueWaves before merger to form Orix Buffaloes. This is game winning bunt and shames Sean Casey's shotoboatingu. What a shame. Cardinals win game four.

Game five! It may be "gum time!" with Big League Chew but it is lose time for battered Little Caesar's Pizza team. It is not about being the star for the Cardinals. They have discipline and very much Wa and they fight their way always staying one step ahead of Tigers. In the end it is 4-2 Cardinals and Tigers go home in defeat. Only question now is how will they redeem the honor of Little Caesar's Pizza? Ha ha ha, American's don't care about honor! WORLD SERIES VICTORY FOR SOUTHWEST BANK CARDINALS!

Heyyyyy says Fonzarelli-san, ha ha ha! It is time once again for choice of number one American baseball hero! Last month choices were Mark McGwire, Jose Canseco and Pete Rose. A lot of vote for Pete Rose, but giant hero Jose Canseco is number one for tenth straight month! Mark McGwire also very popular and his bicep is unmerciful to foes. He is ho-muran king of all of Japan's heart but the people's ovation is reserved for Jose Canseco.

Ohhh! Hooray! This is quite an upset! I thought sure Mark McGwire will hit the ball out of the park on this one. But no, giant monster Jose Canseco is back to destroy the competition. 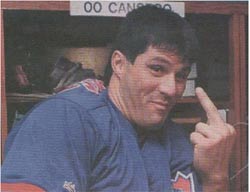 He is a mighty giant battler! What is there to say about Jose Canseco that has not been said ten million times already? I will try. Jose Canseco has amazing hair. He is chief inventor and sponsor of Latino Muretsu, business in the front and party in the back. Its sheen is incredible and sets the fans afire! Jose Canseco is also magical and keeps growing and growing. In 1995 he was 260 pounds and six foot two inches tall. This is hulking for Japanese player but not so amazing for American. But in 2006 he is 950 pounds and two stories tall. He bats with FIVE BATS at same time and hits every ball. Instead of embracing supernatural powers, American baseball rejects these powers and sent Jose Canseco to the minor leagues.

Japanese baseball number one important thing is "Wa" which is team spirit. Individual player can do good things, but personal sacrifice and team spirit are number one. Some Japanese think players of America like Jose Canseco are shameful. Most noble thing is to bunt, but American poweru hittorasu will strike out many time to get one ho-muran! I disagree strongly. Jose Canseco and man made like Mark McGwire are whole team by themselves.

Don't believe Johnny Baseball? If Jose Canseco eats heavy meals he is the exact same weight as entire starting lineup for Orix Buffaloes and they are not even worst team in inferior Pacific League. So I say to fans who insult bold achievements of Jose Canseco and say terrible things about his mysterious giant powers: Otose! Drop it!

Johnny Baseball has one thing in common with Jose Canseco: he is a ho-muran with the beautiful ladies with soft breasts. Here is a picture of Jose Canseco with one of his many wives: 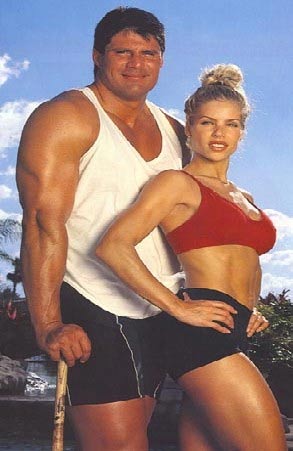 She is a woman made of a lot of meat! Look at her. I would not mind having a slice of that meat at all. Put her beef in my mouth. I am sorry to Daisensei Canseco, this is disrespectful. Jose Canseco is so loving that he chokes his wife every day and she does not leave his side. Yesterday I read a report: "JOSE CANSECO THROWS SON THROUGH GLASS WINDOW (IT SHATTERS)". The next day report will say, I know, "JOSE CANSECO BEST EVER". He is unstoppable. Naisu hitto, Jose Canseco!

I hope you have enjoyed my first article about American Besuboru! I am very grateful you have read this article all the way to finish. Thank you so much. It makes me feel real good!