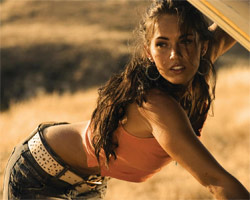 Kafir's muse.Kafir, my new neighbor, is a painter. His muse is Megan Fox. What he lacks in skill at panthering he more than makes up for with enthusiasm and output.

"Paint every day," he said and pointed to a stack of blank canvases.

There were more than a dozen portraits of Megan Fox hanging from the white walls. Some were obvious stills lifted from Transformers, others were likely taken from the stack of magazines containing Megan Fox pictorials. A handful of the portraits centered on specific body parts, mostly her eyes, but there was one of her midriff and another of her nose and mouth.

"She is most beautiful of all," he said and grinned with pride.

Kafir applied the paint like mayonnaise on a BLT, so much that his artwork was almost three-dimensional. The lumpy swatches of color were magnets for grit and stray hairs. His portrayal of Megan Fox was of uniformly low ability, but still managed to be uneven. In one painting she had the bulging facial features of a hydrocephaloid, in another a blue skin might have allowed her to pass for a Night Elf.

"Why does she look wet in most of the pictures?" I asked.

He shrugged. Good enough, I suppose.

Kafir tended towards the ridiculously patriotic for the backgrounds. She posed on the decks of aircraft carriers and in front of waving American flags. One interesting creation featured Megan Fox in an evening gown standing next to the Statue of Liberty. The painting was crude, but I think Megan Fox was the pinkish purple woman standing next to the bright green figure holding a sword.

There were a few other paintings besides Kafir's extensive portfolio of Megan Fox tributes. He enjoyed painting sports cars, usually at sunset, and had an interesting take on "USA Football" that included a team with skulls for a logo playing against a team with a robot for a logo. I think. 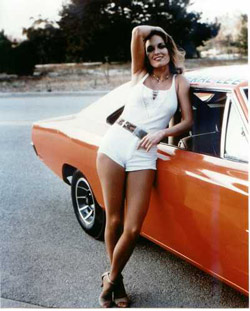 An inadequate specimen in a superlative pant cut.His portrayal of the General Lee included a special guest.

The layers of Postmodernism in that painting made Blade Runner look like the Talmud. He offered me a painting of Megan Fox standing naked under a waterfall, but I declined. I told him I had to get going.

Kafir shared a special moment with me at the door.

"I wish to...eh...hurt her face with the jizzum," he squeezed my hand conspiratorially.

Deep within our hearts, man or woman, old or young.

We all want to hurt Megan Fox's face with jizzum.

I intend to stop by Kafir's this weekend to check in on his panthering. I will update America with his progress as necessary.