Scared Straight at the Supermarket 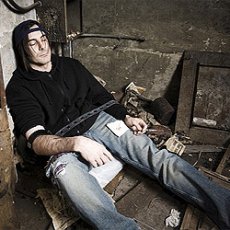 As part of my probation for my recent marijuana arrest, I have to spend a day with a heroin addict. It's supposed to show me the long-term effects of substance abuse and what will happen if I continue down the road of addiction. I'm not sure what to expect, but personally I don't think it'll change my attitude about drugs.

My addict's name is Matt. He's in his late twenties but looks about 40. His eyes are totally void. He lives in a two-room apartment, containing a mattress, a stove and little else. As he shoots up, Matt asks me if I've ever done heroin before. I shake my head, wondering if he's going to offer me some. But he seems to forget we were talking.

After staring at the wall for a few hours, Matt says we need to go somewhere. I assume it's to score more heroin, but instead he takes me to the supermarket.

It's 5:30 and the market is packed. Matt grabs a cart and says he needs to get a few things for a cake. We head for the baking aisle, weaving through a crowd of shoppers who give us death-ray looks as we pass. They all seem extremely unhappy to be here. I stare down at the floor, which is covered with dirt and sawdust. The temperature feels about 30 degrees and I start shivering. 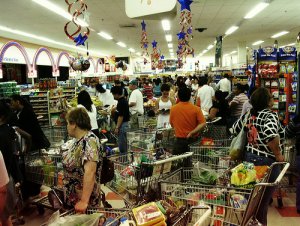 Matt finds some cake mix, but now needs frosting, which is located on the other side of the store for some reason. We make it a few aisles before getting gridlocked in a line of carts. Two women are standing on opposite sides of the aisle talking, which makes it impossible for anyone to pass, because the aisles are about six feet wide. Children all around us are crying, and a homeless man is talking to either a can of beans or himself. The speakers are playing that other song Michelle Branch and Santana did. It's periodically interrupted by a male announcer hawking this week's specials in a voice I can't picture coming from a human being. Inflatable cereal mascots stare down at us from the ceiling with the creepy rictus grins of porn stars.

Eventually we make it through the traffic jam. Matt is tired and asks me to push the cart for awhile. It has a bad wheel and randomly lurches to the right like it's possessed. I have to keep it from running over people a la Christine while maneuvering around abandoned carts and employees pushing pallets of food like they're in some sort of race. At one point I crash into a peanut butter display. While I'm picking up jars an old woman runs her cart into my heel. "Excuse you," she says and saunters by. I turn to make a nasty remark at her and notice the cart is gone. 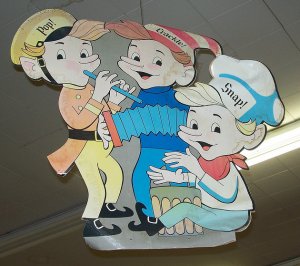 "Someone stole our cart!" I yell at Matt, who's across the aisle browsing baking soda. "Did you see where they went?"

Matt looks around and shrugs. "Guess we'll have to get another one," he says.

We get a new cart and after what feels like a decade complete our shopping. By the time we reach the parking lot I feel tired and depressed.

"Wasn't what awful?" he says and prepares a line of heroin on the dashboard.

"That whole place," I say. "The people, the atmosphere, those Rice Krispies mascots - everything!"

"It didn't seem that bad," he shrugs and starts snorting.

I stare at him incredulously, wondering how he could've missed the ordeal we've just been through. Then I see the glazed look in his eyes and realize it's the heroin.

"Here, you want some?" Matt says, offering the rest of the line to me.

I look at the heroin, then at the supermarket in the background. I think of how nice the drug would probably feel, like all my birthdays and Christmases compressed into a few hours. But I also think of the supermarket and Matt's indifference to it, like this whole revolting experience was just a makeout movie for the heroin and his cells. It seems wrong somehow, not to see the supermarket the way it really is, not to see the urine on the floor, the expiration date on the milk, the stuff that looks like tang encrusted on the cashier's lips.

"No thanks," I say to Matt and we drive back to his apartment.

Along the way he says we have to stop at Wal-Mart and I wonder if I've made the right decision.