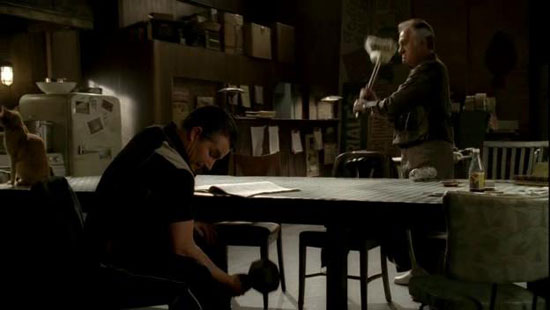 A poster named tattuyu leapt to the defense of Chase and suggested an extremely plausible continuation of the Sopranos story:

Tony was whacked folks. Tony seeing himself sitting in the booth only made sense to me only after the counter guy walked into the bathroom to Tonys left (where Meadow was supposed to be) and the screen went black. When it comes you don't feel it and never see it coming. With Chase YOU GOTTA USE YOUR BRAIN! And, even so, IF Chase wishes to continue with a subsequent movie or more of the series then there are plenty of ways he can carry it on. The finale was pure and f****** brilliant.

So, ideas on how Chase can carry on if he wishes? AJ is now "making contacts" working with Carmines production company. i.e. mob contacts. Carmine could take him under his wing. Sil is not dead. Paulie is not dead. There are still NJ crews yet. One could go on and on with ideas. Hell, who knows?? AND, who cares??

Pizzarella implored viewers to think and consider the idea that it was the viewer and not Tony that died at the end:

Ya gotta think. Every episode required you to think.

On some of the other threads, the claim that Tony got whacked are running rampant. One posted however, realized that it was "us" that got killed. We never saw it or heard it coming. Just like Bobby told T it would be. I'm alternately pissed and amazed.

I'm going to go back and re-watch the episode a few times. After all this time, you know Chase plants hints out there. As soon as Phil turned around to say "bye bye" to his grandkids, I told my wife "that's it for Phil". Go back and look at last weeks episode when Bobby, Sil and Tony are at the Bing - Sil moves in front of the poster for "Cleaver" which marked him - Bobby walked in front of the dart board.

Chase takes creative license to a whole new level. But you can't watch his show like you'd watch CSI or some of the network crap.

Some posters were so frustrated by the ending that they issued a call to arms. I think zwillm wants HBO to use CGI so Guido shoots first:

Since most of these posts say the same thing,
I hope you all contact HBO and express your anger.
I did. I clicked the contact us Link and pretty much said the same thing that everyone is saying...

Waste of Time
Disappointing
Nothing happened
Piece of Crap

I closed the HBO forums in dismay. Like discovering a vandalized Wikipedia entry on Charmander, the Internet had left me feeling bitter and uninformed. Chase had given America no clear ending and no clear answer to the Sopranos question. Rather than leave the door open for more Sopranos, it would seem that Chase has burned down the franchise and salted the earth. All that remains is a legion of bickering fans, outraged that Paulie didn't join up with Phil or that we didn't get to see Tony go out Scarface style with Bobby's assault rifle. 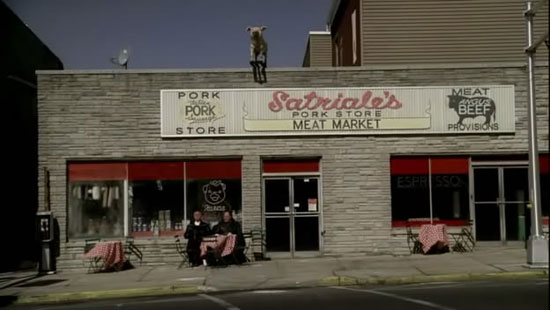 It's hard for me to disentangle my disappointment that the series is over with my feelings for the ending. Chase created the Sopranos, so I naturally want to give him the benefit of the doubt, but I can't help but feeling the final minutes of the final episode made for a heavy-handedly foreboding hunk of cheese that culminated in the ultimate example of television blue balls.

Chase managed to defy expectations and wrap up many of the outstanding plotlines, yet after that final smash to black it seemed as if I had witnessed an unfinished product. Was it a craven refusal to write a conclusion or a last stroke of mad genius Chase thumbing his nose at television conventions? I'm sure fans and critics will argue both in the coming days.

At the very least, Chase is guilty of one serious offense: he has made tens of thousands of people contemplate the significance of Journey lyrics.

Thanks to Aatrek for the animated GIFs.