Oh. Whoops. Guess you don't really have to worry about that anymore. Haha, dude don't worry you can put anything in a blender these days. But man oh man, you gotta hear how that happened. Me and Bryan were getting you to drink Popov out of a filthy bucket when guess who comes to the door? The fucking pigs. I guess one of your shitty neighbors heard Bryan light off those quarter sticks of dynamite in your oven and your refrigerator and the gas tank of your car. So the cop is there and he's all "Who's the homeowner here!?" and we think it'd be awesome to tell your drunk ass that the dude is a burglar in a Halloween costume and the best part is that you believed us!

So you stumble to the door and reach for his gun and in the struggle he knocks out most of your teeth with a big fucking baton. But I know no one can keep my good buddy down and you eventually wrench the gun from his hands and shoot him right through the brain stem. Well let me tell you things got pretty real what with all of the screaming and you smearing that guys blood all over your naked body. We thought the party was gonna end but me and Bryan threw his body in the swimming pool and cranked the Jack Johnson up to 11. Disaster averted, dude. 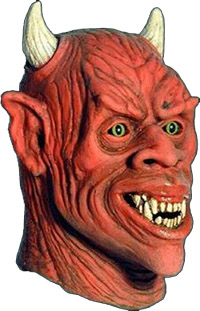 Listen man, I'm gonna go in a second because you're looking pretty green around the gills and me and Bryan are about to play mini golf... on weed! But I still gotta tell you how this party ended---we're talking record books, man. We'd already torn down one of your bedroom walls and people were looking pretty bummed and bored. But I'd be damned if I let a party end before 2:00 on my watch, so I asked Bryan if he had any ideas and oh boy did he ever. So we all cut pentagrams into our palms and held hands around you in a circle and said a bunch of gay-ass French words that Bryan told us to say.

And fuck me if the Prince of Darkness, Satan, didn't emerge from a tear in the fabric of space and time! It was scarier than time I scratched my mom's Miata, but Bryan had been through this before and he decided it would be hilarious to wed you to the devil as one of his unholy brides. You should have seen your face! It's probably a good thing we threw your computer into the swimming pool after the dead cop because all of this shit is going on the Internet the second I have a chance. Whoa, heh, looks like your "husband" is home, faggot. Haha, I better get outta here. Smell you later, dude.