I seen that boy on Sunday, I think he was out on some business. Just an errand and shit. You see him in that... them tights?

Oh, yeah, god. I think I know what you mean. Not tights, exactly. You say Sunday? Yeah, I think I saw that. I was out on Belmont, just walking his half-dog-half-raccoon. Only one of them things exist in the world, god. I heard How He Look So Fresh had this little dog, right, and one night it escaped the apartment and this raccoon spots it and it's like, "That dog look right, son. I'm a pimp-ass raccoon and I'm about getting it in." Word is bond. And that raccoon got it in, son.

So what about them tights? 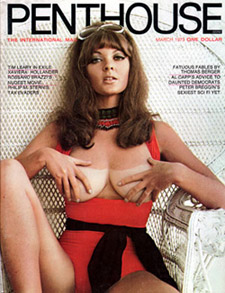 Yeah, I was getting to that. See, it wasn't no tights. What How He Look So Fresh was wearing that eve was technically a unitard, and that unitard had an all-over print of the cover of the March, 1973 issue of Penthouse Magazine. So he got on that Penthouse unitard and that half-dog-half-raccoon on a leash, wearing big-ass binoculars around his neck, and I was like "What it do, How He Look So Fresh?" So he just look at me through the binoculars for a minute and nods, then he pull out a business card and hand the shit to me, and its like, Regard The Kicks.

What shoes he got on? I didn't see the shoes on that day, cousin.

He got some dope-ass old Adidas, but I could not help but note the laces, which struck me as highly unusual, god. They look like some metal spaghetti shit or something, and I'm like, Yo, How He Look So Fresh, pray tell me what them shoes got going. And he puts down the binoculars and leans in real close, and in the very faintest whisper, he say to me: "Cyborg hair."

Got damn. And I believe it, too. One time he gave me his business card and it was just his signature, which ain't written out in words, it just look like a black Cap'n Crunch. Oh, shit! You seen the car he got?

Just once, god. I was out by the Bronx Zoo and I see this S-Class roll up. Shit was iridescent pink, so of course it caught my eye. Soon as it get close, I hear it got Hypnotize by Scritti Politti bumpin up out it, and I know that be How He Look So Fresh jam. So I knew it was him even before he step out, right? And when he do, son. When he do step out: damn.

Word? What he got on?

He got a full Darth Vader costume on, kid. Shit was looking right. I turn to my boy Mark D (late Prince of Falcons, rest in peace brother), and I'm like, Damn, kid, I think that Darth Vader shit is the actual shit from the movie. And Mark D, Prince of Falcons, he be like, "Nah. Nah, kid, that ain't from no movie. That right there be the actual real shit. Like... from space."

How He Look So Fresh, that boy killing it on that Darth Vader shit. What he do then?

Damn. Yeah, kid. How He Look So Fresh been going hard on these streets, but now I think I feel ready to hear some new shit about Tooth Tooth and his ongoing struggle to regain his righteousness after facing a near defeat at the hands of Jeremy Birdcastle, the whitest man in the city.

Many thanks to Mark D, the Street Cactus, AKA the Late Prince of Falcons. Rest in peace.