The Moon's Luck Just Ran Out

The NASA Young Astronauts Outreach Program's Space Newz Bulletin is a regular update about space news written by real NASA astronauts for grade school students across the United States. Several of these updates have been written by ISS Mission Commander Lt. Col. AJ Tucker. After careful review, NASA has decided not to release these bulletins to the schools participating in the YAOP. Lt. Col. AJ Tucker is currently mission commander, but is the subject of an internal NASA psychological evaluation. He has been warned repeatedly about his use of inappropriate language.

Got to say, as it regards moon orbit operations, LCROSS Project Manager Dan Andrews can go ahead and go F himself. Dan Andrews is a F-ing B-word who sits on his fat A-word in FCR2 watching payloads run computer S and do automation. The A-TAC programming team has more control over a mission than that jelly belly S-head.

What earth nerd has got to understand in his little eggy head is that I am currently highest ranking officer of the USMC in space, the undisputed mission commander, and therefore I am the commander of space. I am the king of F-ing space! You don't try to run some lunar orbit BS without me. Don't test me, Andrews.

Now for those of you who haven't heard, the United States of America has had just about enough of the moon. We are just sick to death of the moon or MOOL (Massive Orbiting Object, Lunar) and so we have devised a plan to have our revenge. This plan is called LCROSS which stands for something like Let's C How The Moon Likes This, which in non-technical terms is that we are going to mess up the moon. It's bounced back before, but it is not gonna come back from this one. 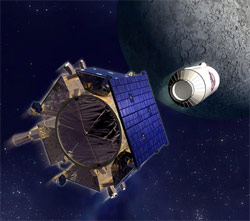 LCROSS deployment. Only NASA could take something as awesome as blowing the crap out of the moon and produce this boring picture.Ostensibly this operation is going to determine if there's ice in the dust on the moon because of some boring defraction or whatever. Who cares? Moon sucks. We've been there a bunch of times and stopped going back. You know why? Because moon sucks. Worthless. Nothing there that won't just tick you off one way or the other. Ooooh, look, a flag that just sits there and doesn't flap around. Great. Hey, foot prints. Oh, what is that I see? Could it be...it is! Another F-ing crater. Let me just check my moon diary. That makes crater number 500 billion so far today.

People keep going to Disney Land because it's fun and exciting and they have great rides and food and the girls they hire to play Belle and Ariel are real hot and easily impressed by mission patches and after hours they will wear the costume if you get them drunk enough. People go back for that. None of that is on the moon. That's why we never go there anymore.

Obviously, this ice BS is just a cover for the real point of LCROSS. Which is to put the moon in its place. No, I don't mean adjust its orbit or something, I mean to teach the moon a lesson. It has to learn that we are not going to be pushed around anymore.

If you want some egghead talk about this then walk into the press office at NASA and they will choke you with binders full of charts and liquid oxygen pressure and solid fuel motor and whatever else. They've got these printouts they do that are on transparent paper and then they just stack like 5 charts together. It's a waste of time.