New York Giants 3, Washington Redskins 17: A Manning choking in the late season and fairweather fans across the state calling for heads of QBs and coaches alike? If this didn't happened every year I'd swear it was the first time it happened!

Atlanta Falcons 17, Philadelphia Eagles 28: I couldn't really think of a joke that hasn't been overdone for this one so I think I'll defer to my friend Scott, talking about Michael Vick flipping those fans off: “It's a good thing to see he does something with his hands on the field”.

Buffalo Bills 10, Baltimore Ravens 21: The only reason I didn't score this game a million to zero is because the Ravens already clinched a playoff spot and I'm guessing their biggest offensive weapon this game is going to be Matt “Muscles” Stover.

Detroit Lions 9, Dallas Cowboys 19: I have no doubt in my mind that the Dallas bench can make John Kitna-ru and company look like a gaggle of bitches. I mean, the literal bench. The piece of wood on the side of the field. If we're talking football teams they should at least demote Kitna to Pop Warner so he can stare at his teammates in the shower or something.

Green Bay Packers 14, Chicago Bears 17: This isn't going to be a joke so much as an actual, honest to god prediction: Next year's Bears will be this year's Steelers minus the Super Bowl rings. You can mark my word on that.

Jacksonville Jaguars 35, Kansas City Chiefs 21: In the next “NFL's obvious week 17 wins that nobody except hardcore fans will watch anyway,” we have a bodybuilder stomping on a newborn puppy.

Miami Dolphins 14, Indianapolis Colts 23: I really hope I'm wrong on this one so I can see Peyton Manning remove one of his eelskin gloves and slap Jim Sorgi across the face with it.

New England Patriots 18, Tennessee Titans 21: I really hope I'm wrong about this one, too, because it means nobody grew a pair and drove a van full of fertilizer and firecrackers onto the Titans' stadium at kickoff.

Oakland Raiders 0, New York Jets 0: If either team scores a touchdown during this game I guarantee at least one announcer will turn to his partner and say “didn't see that coming”.

Pittsburgh Steelers 21, Cincinnati Bengals 35: Two decent offenses aside, the most entertaining thing about this game will be Deltha O'Neal trying to spell “Cincinnati” on his parole forms.

St. Louis Rams 14, Minnesota Vikings 7: I'm not sure what channel this is on, but if they show the animation of the two helmets clashing together for this game expect your TV to turn pink and offer you some hand cream samples.

San Fransisco 49ers 21, Denver Broncos 3: Yeah, that's right. I'm ending the regular-season edition of Armchair Athletes with the 49ers winning. In a blowout. I can only hope the Broncos repay my kindness by ripping out Alex Smith's ACL and choking him to death with it. 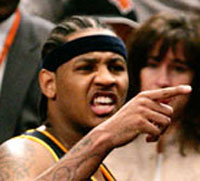 I hate to turn this PW into the Allen-and-Carmelo show (when ESPN makes that their official name be sure to save this page so I can sue for copyright infringement), but after the big Nuggets/Knicks brawl I can safely say Carmelo Anthony is the biggest asshole in the NBA. Also the biggest bitch. For those of you who didn't see the fight, let me break it down for you:

Sure, we could have named other people in the brawl our Crybaby Bitch of the Week. Isiah Thomas, a perennial contender, whined to the press about the Nuggets running up the score, something that seems to happen every time the Knicks lose by more than ten points (read: every game they play). Collins looked like an uncle with Parkinson's Disease giving his nephew a noogie when he grabbed Smith. Even Jared Jeffries, a man whose crowning achievement is "graduated IU athletic program; still got drafted", managed to look like an even bigger asshole than normal by crab-scuttling headfirst into a crowd of coaches and referees, proving once again that a grabbed jersey makes for an effective bitch net.

But in the end 'Melo takes the prize this week. Not only did he prove NBA players couldn't punch a hole in a wet paper bag, he also showed that several millions of dollars a year isn't enough incentive to, you know, not look like a giant crybaby fag in public. LeBron James might storm off the court when he doesn't get enough touches, but he sure as hell doesn't run backwards after he gives someone a full-fledged sissy slap. If LeBron James hit you, you would know it. Collins probably felt a gust of wind on his cheek and looked up to see Carmelo darting backwards like a cat with a sock on its head.

In the end Anthony got 15 games for his indiscretion, which is pretty much what you'd expect from a guy who leads the league in scoring and sappy love letters to David Stern. Assuming he learns his lesson after two weeks of Stern's Patented Protein Shakes, I doubt he ever gets in a brawl like that again. I mean, when you're on the same team as JR Smith and Allen Iverson, you have a reputation to uphold. If the name "Trailblazers of the West" wasn't already taken by the Trailblazers, I could make a fortune in T-shirt money, tell you what.