Thanks for participating in the Dawn Of War II multiplayer beta test! The extensive feedback we received from the community has culminated in this patch, a preliminary version of the retail client that will be released later this month. Have fun, and keep testing! 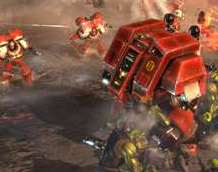 - Players with dual monitors can now enable the "Half Rendering" option in the advanced graphic settings tab. This results in half of the game (the top third) being displayed on both screens, giving you four times as much of one fourth of the screen for half the processing power twice as much of the time.

- In addition to particle effects, added quark effects which cannot be seen even at the highest zoom level. We might have also implemented dark matter effects, but that's difficult to prove or disprove.

- Addressed an issue that ran the game in total silence unless players smacked the side of their computers two or three times. Now it should only take one smack.

- It is now possible to move units by clicking on a destination or target. We'd still prefer you to use the method of yelling "getting warmer" or "getting colder" into a microphone as your unit stumbles about the screen very slowly, but we also understand that the masses are always resistant to progress.

- Health is no longer represented by semaphore flag signals.

- After watching hours upon hours of competitive matches and analyzing the strengths and weaknesses of each race, the Eldar have been balanced. The freakishly large heads atop their stick figure bodies no longer cause them to fall over at the beginning of each match, pinning them to the ground helplessly.


- Dreadnoughts can now be upgraded with very tiny plastic swords, the kind you get in a cocktail at a tiki bar. The upgrade adds nothing to attack damage, but it means the world to Drink Swords, manufacturers of the world's finest cocktail weaponry and proud sponsor of our development studio.

- When Drop Pods are used to deploy units from low orbit, the units will now be placed inside the pods instead of just under them.

- Corrected the Ork Trukk unit's spelling, which annoyed many of you. Sorry about that. The vehicle wasn't meant to talk, let alone break down a word's origins and attempt to spell it aloud.

- To counter the usefulness of Without Number, Tyranids must halt all attacks/movement every time someone says "Hey, those things sort of look like the alien from that Alien movie"!

- In addition to the resources earned by controlling victory points, players will now get "Fun Points". By our calculations, this will add 85% more fun to a game that's already quite enjoyable.

- Removed a crash caused by players clicking the "Crash Game" button that's prominent on every loading screen. Although the button is now impossible to interact with, it is twice as large. 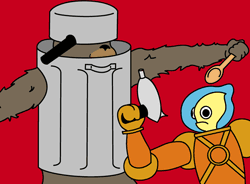 This just showed up in my inbox:

Time is running out for you to rejoin the epic adventure that is Star Wars Galaxies and reclaim your houses, structures, real estate and game assets before they are packed up and removed from the game servers. Come back to Star Wars Galaxies today!

We've been facing some tough economic times as of late. Houses and jobs have been lost, ice cream cones have been dropped on the ground, and some people have even bumped their shins on coffee tables. Reposting this message is the least I can do to help prevent people from losing virtual houses in games they stopped playing five years ago.

Afro Samurai
(Professional Video Game Review Byline Writer Mode) More dismemberment and gore than you can shake a pick at. 6/10