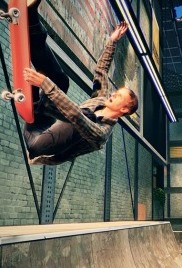 Activision and developer Robomodo (creators of the critically acknowledged Tony Hawk Ride and Tony Hawk Shred as well as the technically functional Tony Hawk HD) are proud to announce Tony Hawk's Pro Skater 5 for the PlayStation 4 and Xbox One.

This new installment weds the series' finely tuned gameplay with new additions such as power-ups and the ability to shoot projectiles.

Players will choose from a variety of real-life skating superstars and beat the boss in the lava level by bonking it on the head three times.

Once again the series' offbeat soundtrack will accompany the action. From hip-hop to dubstep, gamers will enjoy a number of pleasing songs as they master the new open world survival elements and scrounge for rusty tins of beans in abandoned horse stables.

All-new levels will provide dozens of hours of rewarding exploration. The high score goes up to nine billion. You can pick up health packs. Use the menus to upgrade your skateboard's skill points. Find all 100 crystals. Climb the tower to reveal the map. Skin creatures to equip powerful new elbow pads.

Seamless online and offline play make this a truly next-gen game. Get ready to rescue the captured princess and call in air support during the scripted slow-motion cinematics!

The first citizen who enters your town is greeted by a pitifully small shower of confetti and the toot of an out of tune kazoo.

Does NOT apply to grenades.

Vehicles are no longer bound by the traffic laws of man, but by objectivist free will. Who pulls out first in a four way intersection? The individual who believes they should. In this scenario nothing can go wrong. Only the crushing weight of "the good of all people" can bring the intersection to ruin. Let the flow of transportation be dictated by merit.

This mod, and I quote, "corects non white skin textures to make them white and makes everyone realisticly sexy"

Water pollution is now represented by a floating pile of Ouyas. Instead of smog, polluted air will now appear as a patch of terrible post processing effects including motion blur and chromatic aberration.

Should stop your city's citizens from constantly yelling "Jennifer!" (who is Jennifer anyway?)

Inserts a stunningly realistic thumb over a random corner of the screen.

Increases all in-game objects by a factor of 4. Also reduces the city plots to 1/4th their original size. For some reason this increases the size of dollars as well, making them not only visible but (once you get a healthy economy going) creating a cloud of money that's nearly impossible to see through.

Tired of your road layouts not lining up exactly the way you imagined? This mod's for you. Replaces all road models and textures with gross throbbing veins.

Crypt of the Necrodancer
Dancing is my idea of a seemingly bottomless dungeon, so it's all the more surprising that this game is such a delight. 7/10

Halo: Spartan Strike
Say one thing for this game, it certainly follows in the footsteps of Halo 4, The Master Chief Collection, and Bungie's Destiny by doing barely enough to resemble expectations while still letting everyone down. 4/10

Mortal Kombat X
It's not that I hate fighting games, it's just (everything pauses for ten seconds while an over the top attack animation plays out for the twentieth time) that sometimes it feels like there's too much between the player and (prompt to buy a season pass). 6/10