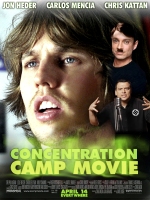 Tagline: Get out of your attic and into the theaters! We spent all our comedy rations on this one!

Plot Outline: Hop on a comedy train to war-torn Europe, where the question is whether you'll laugh or die first. We're guessing the former!

User Comments: Lox of laughs! Zyklon-B there or be square! (more)

Dee-Ron Rosenbling: Damn, dawg, we gotta get out of this concentration camp!
Tyrone Crunkenstein: Sho' nuff.

Token Skinny Man Holding Cupped Hands Out Of Bars For Food: (Thinking) I never thought it would get this bad. Never in my 34 years would I think humanity could sink this low, that our people could be subjected to such a horrible end. This is hell. I have died and this is hell. This is the only justification I can provide myself. This is the only justification I can provide my aching soul. ...But at least we get plenty of sunshine! Wocka wocka wocka!

Heinrich Himmler: You will all be taken by train to Auschwitz, where you will be held in internment for as long as we deem necessary.
Dee-Ron Rosenbling: (Horrified) Auschwitz?
Tyrone Crunkenstein: Gehzunteit!