Indiana Jones and the Vessel of Ra 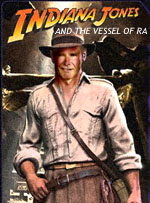 Tagline: Indy's back and better than ever!

Plot Outline: The Jones Family must stop a Nazi remnant group from breaking into the great pyramids of Egypt and unleashing a spirit who could resurrect Hitler... (more)

User Comments: Not the best of the quatrolilogeny, but a wharthy hair to the... (more)

Henry "Indy Jr." Jones the Third: (Speaking into phone) Pop, the Fifth Column have us surrounded! What should we do?
Indiana Jones: (Noticing the Fifth Columnist peeking in his office window) I'll get back to you on that (Hangs up; grabs whip).

Sallah: My holy stars, Indy, how long has it been? You look positively weather-beaten! Your travels have surely taken their toll.
Indiana Jones: It's not the years or the mileage, Sallah, it's the extensive rusting of the undercarriage.

Indiana Jones: We've got to make sure that plane never takes off.
Henry "Indy Jr." Jones the Third: Looks like there are three cases of dynamite on the truck. I might be able to swing from that crane with my whip, dodge the gunfire, and toss the dynamite at the Nazis.
Indiana Jones: Help your old man sit up.

King Ra: Your superhuman abilities were our gift... passed through the blood.
Henry "Indy Jr." Jones the Third: Pop, if what he's saying is true, then the entire Jones family descended from these aliens.
Indiana Jones: Button it, sprout. Let this damn mummy explain it.

Professor Henry Jones: Who knows what trouble that boy will get into on his own?
Indiana Jones: Just think: even if we're not around, he can still have incredible adventures. Just like his old man.
Henry "Indy Jr." Jones the Third: So long, pop. (faces camera) I have a feeling we'll meet again real soon.