EXPECTATIONS: My visit with the Pixar genius factory is always one of my favorite filmgoing experiences of the year. I get a taste of Pixar Yet to Come, a neat little experiment in the form of an animated short, and finally a marvelous 90 minutes of CGI storytelling at its finest. Even if some people thought Cars 2 was a departure into lazier territory (it wasn't), I have every confidence in the studio to turn out a thrilling, compelling, and all-around entertaining fairy tale. I mean, it's not like anybody else is doing it properly these days, right? Yessir, Pixar can do no wrong...

REALITY: Brave is a decent film that people should see. That much needs to be stated right up front, because it's clear the only conversation people want to have about this film is whether it's a "return to form" after the much-maligned-but-misunderstood Cars 2 or if it represents the next step in the inevitable 2010-decade Pixar Slump. It is neither. Brave is a much-needed step outside of Team Lasseter's comfort zone, and while the end result isn't up to the same storytelling caliber of Ratatouille or Up, it's a sign that Pixar isn't afraid to embrace an older form of storytelling to help them churn out quality cinema.

Merida (Kelly MacDonald) is a Scottish princess whose father (Billy Connelly) teaches her to be a resourceful and fearless archer, but whose mother Elinor (Emma Thompson) constantly grooms her for the day when she'll finally give up the bow and become bride to the prince of one of three neighboring provinces. Not a fan of the idea, Merida challenges her mother at every turn, until a fit of anger leads her to a witch who sells Merida a spell that promises to 'change' her mother. Rather than changing her point of view or personality, the spell literally changes Elinor into a bear. This, of course, isn't what Merida had in mind at all, and so she must find a way to change her mother back before her father accidentally kills the bear that is suddenly wearing his wife's crown.

There is a very good reason why Brave's ad campaign has only shown you the plot from the first act of the film. It's not because they're trying to hide the shocking twist or that they've fallen so far down the creative chasm that the film has nothing else to offer. It's because once we learn the film's central conceit, the rest of the story is laid out for us like so many blue wisps leading us toward some horrible fate. As Merida comes to terms with what she's done to her mother, the film's endgame suddenly becomes clear. Somewhere in the second act, a sense of desperation sets in and we start getting the same feeling we got from the junkyard scene in Toy Story 3 or the final moments of WALL-E. "Oh God, they're actually going to do this, aren't they? This is going to be heartbreaking, isn't it?" 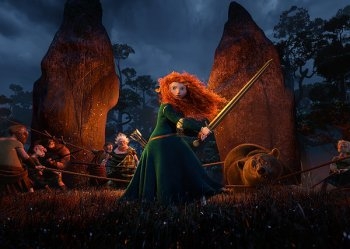 Wow... so brave!Of course, the people at Pixar are no sadists. It probably goes without saying that there's a happy ending, but the road they take to get us there is just as emotionally charged as any of their other films. While the story itself may not be the most thrilling, the situation is tense and the outcome uncertain. That's the reason Pixar keeps bringing us back time and again. We never doubt for a second that Merida will see the error of her ways or that everything will turn out okay, but if anyone is capable of creating a palpable sense of dread in a children's film, it's Pixar.

Then again, it's not as simple as all that. Brave feels very much like a film conceived by committee. Written by co-directors Mark Andrews and Brenda Chapman, along with Irene Mecchi and Steve Purcell, Brave is a film whose three acts can feel pretty incongruous. The opening portion of the film is by far the strongest, allowing us to explore the medieval Scottish setting and become acquainted with its characters in expedient and hilarious fashion. This world feels fully realized, steeped in history and full of wonder.

Act two, on the other hand, features a woman once austere and proper suddenly turned into a bear whose mannerisms can best be described as "amusingly hoity-toity." Despite being the emotional core of the film, Elinor-bear is largely played for laughs and becomes difficult to take seriously. This is precisely the same problem Puss in Boots ran into, though at least here it doesn't derail the entire film. It is worth mentioning, though, that while the landscapes and settings are a gorgeous sight to behold, the character designs seem somewhat out of date. Merida and Elinor in particular look like 3D versions of early 2000s Dreamworks characters. I would say they intentionally designed them that way to give the story an outdated feel, but the last film Brave needs to be compared to is The Road to El Dorado.

The ending, as with many fairy tales, seems like an afterthought or a foregone conclusion. Only the youngest among us will be entranced by what transpires in the film's closing moments; the rest of us are left wondering whether Merida truly learned anything through this whole ordeal. Of the film's two strong, stubborn women, only one seems to learn an important lesson, and it's not the lesson the film seemed to build toward. Brave doesn't exactly end on a Family Guy moment where everyone agrees the day's lesson isn't important, but when the lesson is "Parents should pay more attention to their children," it becomes clear that this particular production is a fair deal softer than the fairy tales it's emulating.

MINORITY REPORT: All anybody has been talking about with this film is the main character's hair. It's very important and cinematic hair, I suppose. History will remember that hair, just like they remembered the hair of Jennifer Aniston. Now draw it from memory! It's important! Important hair! - Ian "Professor Clumsy" Maddison