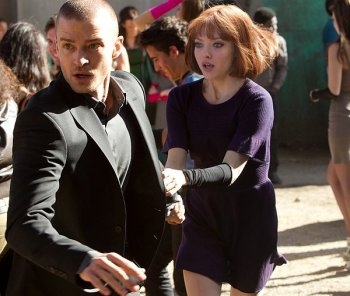 Why does every action thriller have a scene where a guy drags a girl whilst running?REALITY: Science fiction, as a genre, is inherently political. The difference between far-fetched and conceivable lies within the ideals of the real world at the time of production. Oddly, the tone of most political science fiction is conservative, as it warns against the dangers of progression. Take Michael Crichton's work, for example. His books all boil down to: "I'm going to press this button!" "You better not press that button!" "OH NO WE SHOULDN'T HAVE PRESSED THE BUTTON!" (Why was anyone surprised to learn this guy hated science?) In Time is so deeply entrenched in the current political climate that it's difficult to judge it at face value. Most of what makes it good comes from its relevancy to today's audience, so as a film, it might not hold up twenty or thirty years from now. I have to predict this with only a few hours' hindsight. If only I had more... time?

I'm getting ahead of myself here. In Time revolves around factory worker Will Salas (Timberlake), who lives with his mother (Olivia Wilde). This is made possible -- and only slightly less creepy -- because Will lives in a universe where the human body doesn't age past age 25, but from then on, a timer on your arm tells you exactly how much time you have left in your life. The movie doesn't get into why or how this happened, but it doesn't matter. It matters so little that the movie's first lines are basically "Don't ask how it happened, it is what it is." I'm not a fan of the "turn off your brain" strategy towards film-watching, but when the movie flat-out directly tells me to, I'll give it the benefit of the doubt. Anyway, the time on your arm can be spent and earned, and it has become the form of currency. Bus tickets, rent, gambling debts -- they're all paid with minutes, because time literally is money. 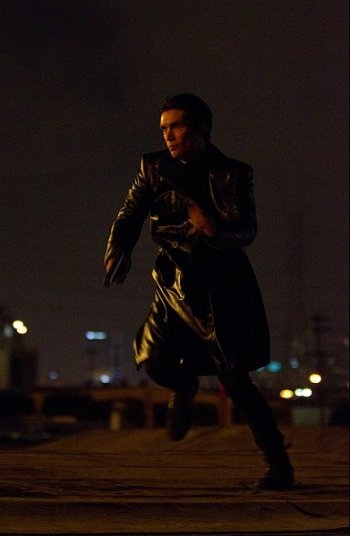 Grainy sprinting with guns, what's not to like?When Will saves a suicidal rich man (Matt Bomer) from some thugs, the man gives him the century that remains on his arm and disappears, leaving a note that says "Don't waste my time." (Oh, it gets more ham-fisted from here.) All the time he has to spend doesn't help him when he is unable to save his mother from losing her very last second, because of a cost-of-living increase. Will cries on-screen for about three seconds, then the next day he sets off to the rich sector of town, planning to disrupt the system. Wait, really? You were just given an entire century, and you can't spend a day getting over your dead mother? That's cold, man.

While attending a party at the home of time-bank owner Phillipe Weis (Mad Men's Vincent Kartheiser), Will is arrested by Timekeeper Raymond Leon (Cillian Murphy). He escapes and takes Phillipe's daughter Sylvia (an uncharacteristically bland Amanda Seyfried) hostage. Together the two go on a Robin Hood crime spree, stealing from the rich and giving time to the poor, the whole time being pursued by Raymond. I feel it important to note that Raymond's position is Timekeeper, not Time Cop. If he were TimeCop, then he would be Jean Claude Van Damme, and this would be a very different movie.

So, there is a lot going on in this film, and none of it is subtle. This is a movie about class warfare, and it revels in it. Justin Timberlake is the 99%. It's not even subtext after a certain point. I'm not saying this is a bad thing, because it's really the best thing the movie has going for it. Once we accept this conceit, the film's metaphoric concept is solid and interesting. However, it's blatant enough without having to have recurring lines like "Many must die so a few can become immortal." The world that director Andrew Niccol has created here works because it is only slightly different than the real world. There's something very dystopian-feeling about the slum Will comes from, even though it looks no different than inner Los Angeles, except everyone wears arm-bands. This is basically the whole point, and it's very effective on Niccol's part. 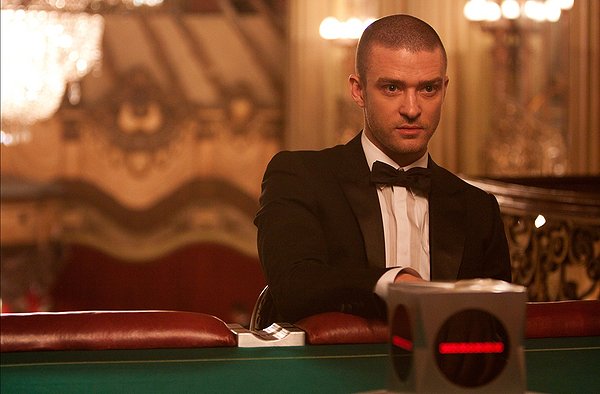 You're playing on borrowed time, mister!

However, a good concept and an interesting world do not a good movie make. In Time has many flaws, most of which come from the odd pacing. Once Will and Sylvia get together, the story shifts from its interesting concepts to their much less interesting Bonnie and Clyde romance. Let's leave the disturbing fact that Will has more sexual chemistry with his mother than he does his girlfriend alone for a second and focus on the issue that Timberlake and Seyfried have nothing interesting between them. The two are fine actors on their own, but together they basically just look past each other. Seyfried spends most of the movie focusing her amazingly sized eyes on Timberlake as though she has never seen an attractive man before in this world where no one ages past 25. (Granted, you could probably line up a thousand 25-year-olds and Justin Timberlake would be more attractive than them, but still.) That's really it. There's not enough tension between them, and not enough cat-and-mouse between Timberlake and Murphy to make anything interesting.

In addition, there are parts of the film that seem incomplete, as though there's a director's cut lurking somewhere that will be more conclusive. Everyone keeps saying that disrupting the order will inevitably hurt the lower classes. The film tries to show why people believe this and fails. Also, Raymond has a backstory that's only fleshed out at the last minute, literally. And, finally, it sets up Will's father as some sort of super arm-wrestling time terrorist, and... oh, what's that? You're confused by the arm-wrestling part of that sentence? Well, you see, people arm-wrestle each other for extra time. They arm-wrestle... to the death, which is how Will's father died... OR DID HE? (No, seriously, I'm not actually sure. That wasn't really clear.) In any case, the whole thing looks just as ridiculous as it sounds, and it makes it very hard to take a dramatic scene seriously when that's what it revolves around, and neither Sylvester Stallone nor Jeff Goldblum are involved.

A few weeks ago, in my Ides of March review, I made a joke about the various Occupy movements around the country. It's still funny, but I've felt bad about it because it turns out that people are actually getting their skulls busted all over the country at these things. I'd like to think of In Time as my chance to make it up. Listen, everyone who is supporting Occupy Wall Street, but isn't actually occupying anywhere other than their living rooms right now, this movie is made for you. When people say the movement lacks a clear focus, you have a movie you can point to. (The movie ALSO lacks a clear focus, but we won't tell them that.) For this reason alone, at least for the time being, In Time is an important movie. I only wish for all our sakes that it was also a good movie.

MINORITY REPORT: When did Justin Timberlake go from a recording artist I couldn't care less about to one of the most interesting actors of his generation, a leading man who is not only consistently entertaining to watch but also challenges himself with a wide variety of roles? I feel like the world has gone crazy, but in a good way. - Ian "Professor Clumsy" Maddison