EXPECTATIONS: In the spirit of Hunter S. Thompson, I expect to pack a suitcase full of coke, booze and shrooms; insufflate, imbibe and ingest my way to oblivion in the multiplex parking lot; not get around to reviewing the film at all; and waste 2,000 words ranting about Hollywood and describing in enthusiastic detail just how fucking high I am.

REALITY: For all of its quirks with a capital Q, The Rum Diary is an orthodox movie -- several orthodox movies, actually -- disguised in unorthodox clothing. Howard Hawks defines a good movie as one containing three great scenes and no bad ones, so The Rum Diary presents a dilemma for critics: It contains exactly three great scenes and several bad ones. And even with those scenes, this film is exhausting as it drags the viewer through more false endings than The Return of the King. 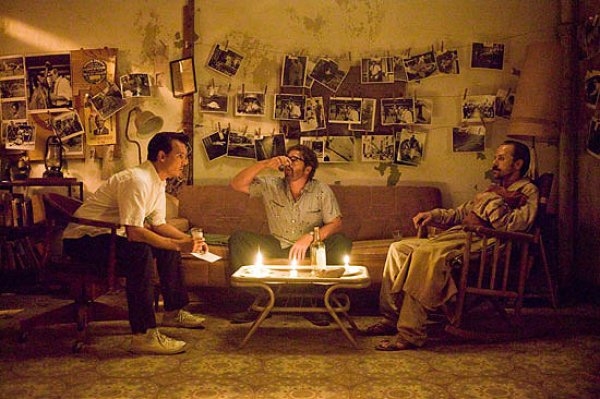 Quite obviously, Paul Kemp (Johnny Depp) is a Mary Sue for Hunter S. Thompson, one who takes a job at a fledgling paper in Puerto Rico, drinks a lot, exposes corruption and gets the girl...almost. Like the film itself, the narrative is a study in half-measures as it meanders along in borrowed threads until it hits a resolution that satisfies neither the characters nor the audience; the plot is Chinatown-lite, the girl (Amber Heard) is indistinguishable from any other two-dimensional free-spirited love interest in a long history of pseudo-independent femme ineffectuals; the villain (Aaron Eckhart) has no other characteristics; and the general thrust of the story, the (white) fish out of water who generates laughs as he clashes with locals, is as old as film itself. And that his character accomplishes nothing feels more like a cheap appropriation of woebegone the-bastards-won fatalism than an organic, fitting conclusion. 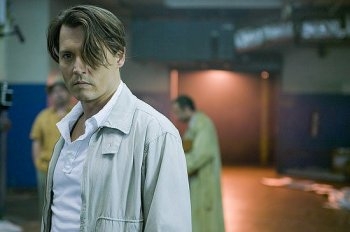 Dat 2: severely hung over.Since I haven't read the novel on which the film is based, I'm going to play the optimist and assume this is the fault of the screenwriter, not Thompson himself. Regardless, whoever's responsible crafted the framework for the most schizoid film of 2011, one that constantly works against itself in generating those three compelling moments. While the setting is well-captured -- especially the office of The San Juan Star, creating what amounts to porno for journalists with a hard-on for history -- and Giovanni Ribisi essays a truly enjoyable character, of whom far too little is seen, the negatives continue outweighing the positives until The Rum Diary implodes like a soufflé.

Much of the blame rests with Depp, who has become less an actor than a vessel for peculiarity. Watching his performance here is like watching a chameleon shifting through all of his different disguises in a desperate ploy to evade a particularly canny predator; true, his performance recalls his Thompson in Fear and Loathing in Las Vegas, but he's also appropriated the mannerisms of Captain Jack Sparrow, Willy Wonka, the Mad Hatter, Ichabod Crane and, hell, maybe a little Officer Tom Hanson. What really draws undue attention to the artifice in acting are the ways in which his career has intertwined with Thompson's on-screen persona; how many actors have played one Mary Sue and waited thirteen years to play a younger Mary Sue for the same fucking guy, a righteous dude though he may be? This is time moving backwards, and it's distracting.

I wasn't Fear and Loathing's biggest fan, but I chalk the discrepancy between my opinion and that of my peers up to a difference of taste; I can recognize Fear and Loathing's strengths and politely say it wasn't for me. But the qualitative difference between Fear and Loathing and The Rum Diary is undeniable; even as it makes the former look better by comparison, it carries with it the faint whiff of bullshit that invites reexamination of its predecessor. Do these films really qualify as outsider cinema, or are they made for people who love "indie" music that isn't truly independent?

Based on The Rum Diary and the disservice the filmmakers have done to Thompson's persona, he's seeming less like an outlaw of ideas and more like the progenitor of the YOU LAUGH AT ME BECAUSE I'M DIFFERENT... generation. Now kindly stop fucking his corpse.

MINORITY REPORT: I just know that because of this movie, someone, somewhere is going to say "Looks like Johnny finally found out why all the rum is gone!" I hate that person so, so much. - Martin R. "Vargo" Schneider