EXPECTATIONS: This is really a toss-up. On the one hand, this movie offers Helen "World's Sexiest Woman" Mirren and a neat-looking spy-thriller story written by Matthew Vaughn, whose work I've always enjoyed. On the other hand, it's directed by John Madden, who is not the terrible retired football coach/commentator but rather the terrible director who made Captain Corelli's Mandolin, the Nicolas Cage movie that bores Nicolas Cage to tears. It also stars Sam Worthington, who was last year's winner of the coveted Jared Leto Award for Uncharismatic Acting. Really, this 50/50 shot is better than the odds for anything else this weekend, so in some nutty way, I guess I win.

REALITY: An old writing professor of mine used to say that a story happens when you take some characters, run them in circles around a tree, and see what happens. For the most part, this is exactly what happens in The Debt, except in this case, the Tree itself can talk and make antagonistic comments. 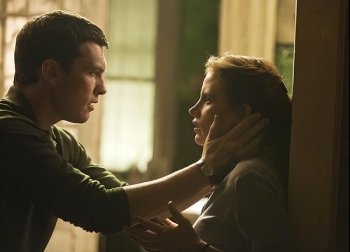 No means no, Sam!The Debt tells two stories with the same group of characters. The first follows young Israeli Mossad agents Rachel (Jessica Chastain), Stefan (Marton Csokas), and David (Sam Worthington) as they hunt down a Nazi war criminal posing as a doctor in 1966 Berlin. The latter story takes place in 1997, and concerns the older versions of Rachel and Stefan (Helen Mirren and Tom Wilkinson) as they investigate the details of older David's sudden suicide. Any time you're balancing multiple stories like this, you run the risk that one story will be more entertaining than another, and unfortunately, this movie made me want to watch more of the Sam Worthington scenes and less of the Helen Mirren, and that just shouldn't happen.

Actually, I'd like to make a note here about Sam Worthington's performance: It's pretty damn good. Worthington proves he's a better actor than most people give him credit for. He might even be a better actor than I'm giving him credit for now, because he's spent the past few years acting like an incredibly bland performer, which is apparently not true. I'm not sure what he hoped to accomplish with this ruse, but still; pretty sneaky, Sam Worthington!

Okay, back to the movie. Things don't go as planned in 1966, and the team is forced to take their captured target Dieter Vogel (A delightfully wicked Jesper Christensen) back to their hideout while figuring out how to get him back to Israel alive. These are the film's best scenes. Our main antagonist spends most of the film incapacitated, but Christensen still makes him feel like a real threat, an observer who knows exactly what to say and when to say it. In short, he's the tree the characters are running around, and that tree is a real asshole. Watching the claustrophobic drama unfold, especially the love triangle between the three agents, is just as interesting as watching Vogel twist it. 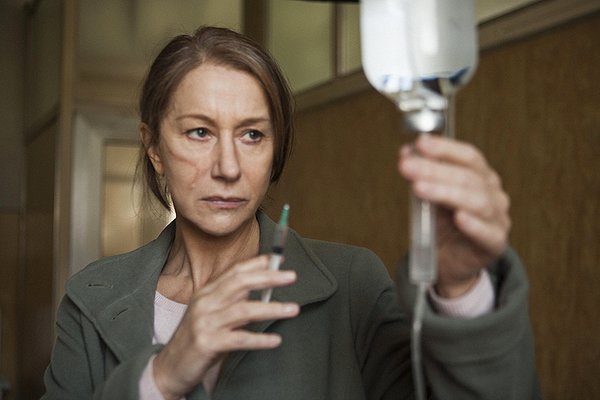 Unfortunately, the problem is that the 1966 story is too good, and even though it sets up the moral dilemma for the 1997 story, the latter sadly just isn't that interesting. Wilkinson and Mirren are both as great as they always are, but once the 1966 story ends, the audience is left saying "Oh, what an interesting twist on what we thought! That was a strong story... oh, there's forty minutes left in the movie." As a result, the conclusion we're actually given feels unsatisfactory and bizarrely coincidental. It's dessert before dinner; we've already gotten the payoff, what's the point? Why buy the Helen Mirren when you can get the Jessica Chastain for free? (Answer: Because Helen Mirren is a beautiful, classy lady, you heathens.)

One of the things that impressed me the most about The Debt was Christensen and Chastain's ability to squeeze tension out of absolutely nothing happening. Much of their plot revolves around Rachel visiting Vogel, posing as a gynecology patient. This means that Rachel is face-to-face with a villain who is essentially Doctor Mengele and is put in literally the most vulnerable position a woman can be. Ignoring the stupidity of that plan, it offers some great moments between them, and it raises the stakes of every basic conversation they have. This is a good example of building suspense, and I applaud Madden for it. I also applaud composer Thomas Newman, because the score for The Debt is exciting and supports the story perfectly. This is a movie that has a lot going for it, but ultimately it can't keep up with its own momentum. Once that tree is cut down, we're just left watching people run around nothing.

MINORITY REPORT: So this is why you've been putting posters of Helen Mirren up in your corner of the office and crying like a baby whenever I try to pull them down. - Ian "Professor Clumsy" Maddison, Esq.