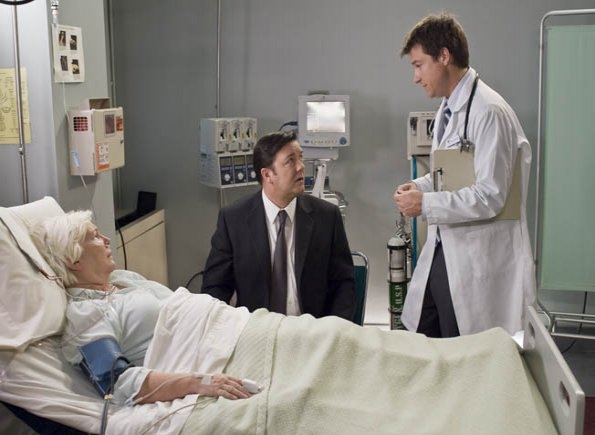 The Invention of Lying's sole instance of meta-humor: The old lady's a personification of Ricky Gervais's career...and she's flatlining.

The Invention of Lying: Gervais reinvents his own career...as a sell-out

Ricky Gervais spearheaded the popularisation of a new wave of British television comedy with The Office, becoming a huge success in the States in the process. It was the release of Ghost Town that suggested for the first time that Gervais' Stateside success had dulled his edge. So you can understand that my anticipation for The Invention of Lying is tepid at best. I'm really hoping for Gervais to pull this one out of the bag, but this looks like the kind of lacklustre comedy that would have been popular amongst the pre-teen crowd in the mid-'90s.

The Invention of Lying is a bizarre high-concept romantic comedy, except without the romance or the comedy. And the concept, that everybody in the world tells the truth and one day Gervais discovers that he can lie, doesn't really hold water in a dramatic sense.

Gervais uses his newfound ability for good. A bit. Then he just uses it to get wealth and power. In the film's biggest attempt to be edgy, Gervais actually invents religion and become a prophet to the all-powerful "Man in the Sky." This never really goes anywhere, though, and it just serves to slow down an already sluggishly paced film. At 100 minutes, you wouldn't expect this to feel overly long, but it really does. Especially when you're essentially just watching the same joke being repeated over and over again, and it's not even a funny one.

Atheistic agendas and unrelatable characters aside, the biggest crime this film commits is quite simply that it isn't funny. There are some barely smirk-inducing moments at times, but they are too few and far between and aren't nearly funny enough to redeem any of the film's failings. Even the slew of surprise cameos, including Edward Norton, fall way short of the mark. On the whole, it's just boring, and the concept crumbles under any kind of scrutiny.

Haven't we come to expect better from Gervais? In fact, for a while we pretty much expected the best from him. Now he seems content with making his high concept fluff; I wonder just how long his mass of showbiz friends will stick around and watch him make a fool of himself.