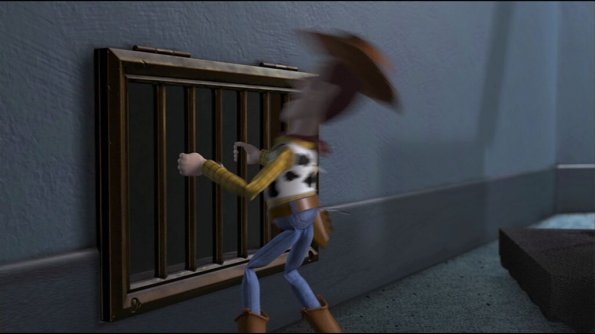 I've got a feeling that watching Toy Story in 3D is going to make me intensely depressed. As a kid, these were two of my favorite movies, and I'd watch them compulsively (the first more so than the second). Seeing them on the big screen for the first time in 10-15 years might be a none-too-subtle reminder that I've grown up and become a horrible person who does nothing but crack stupid jokes on the Internet. Or it could be just a delightful afternoon at the movies...IN 3-D!!!!!

Imagine you're 8 years old again. I know this might be hard for some of you. The average teenager can only remember back to his 14th birthday, but just bear with me. You're 8 years old. Mom and Dad take you to this new Disney movie about toys coming to life.

"Remember that movie about the Indian toy in the cabinet?" asks Dad. "Have we got a treat for you!"

That movie turns out to be Toy Story, the most mind-blowing experience your 8-year-old eyes have ever seen. Being an impressionable kid in a hopeless consumer culture, what's your first instinct? "I MUST HAVE ALL OF ANDY'S TOYS!"

This, I'm ashamed to admit, was me. I had Buzz Lightyear. I had Sheriff Woody. Hell, I even had Slinky Dog. And because I've become a horrible packrat, chances are all of my old Toy Story tie-ins are gathering dust in a closet in my parents' house. The first film of the double-feature was a fun experience, as this sense of guilt had not yet washed over me. I became that little kid all over again, wearing those goofy Risky Business 3-D glasses over my already goofy prescription glasses. I was having fun; the 3-D was more like Super-Duper-Depth-of-Field-D," but at least it wasn't gimmicky.

I immediately knew something was wrong, because I stopped viewing Woody and Buzz as toys. These weren't the invincible plastic figures of the last movie. These were like a fragile, neurotic endangered species. I suddenly cared about the plight of a little denim cowboy. When Woody gazes into the ventilation shaft, I too was forced to stare into that abyss and holy shit, Nietzsche was right.! Not only had I succumbed to Disney's marketing ploy all those years ago, but I'd become the very person of which the movie seemed terrified. I'd moved on with my life, while Woody, Buzz,and the Slinky Dog were literally choking on dust in a box back home. That abyss stared back and now I can never unsee Toy Story 2.