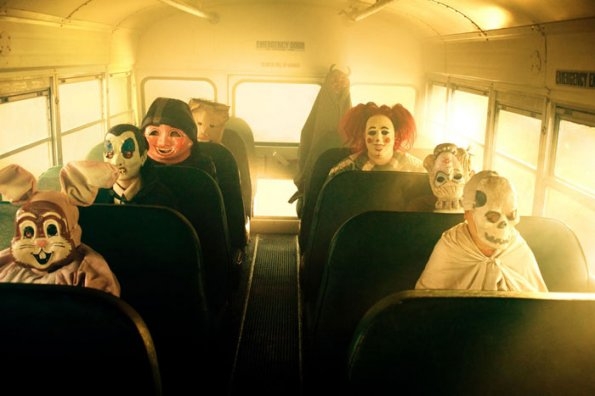 And the weirdos on the bus go 'round and 'round...

With the advance buzz and a chilling trailer, Trick 'r Treat promises to be one of the scariest movies in a long, long time...and an unfortunate oversight by Warner, which, afraid to compete with Saw VXIIIXVL for multiplex dollaz, pulled this from theatrical release last year and resigned it to direct-to-DVD hell.

OK, so it's not really scary -- at best, it's occasionally creepy. Instead, it's a throwback to the kind of premium-cable horror anthologies of yore, with three delightfully twisted morality tales loosely tied to a fourth that stitches the narrative together, and it's a joy to watch.

Trick 'r Treat alternates between an oddball take on the holiday-slasher flick in the opening and closing segments, a black comedy about a murderous principal whose young son arrives home unexpectedly in the middle of a kill, a reimagining (that word's so popular these days!) of Little Red Riding Hood and a ghost story about a schoolkid prank gone terribly, terribly wrong.

Each of those plots would feel right at home in Tales from the Crypt, and Trick 'r Treat's only real shortcoming is the lack of the Cryptkeeper. Still, Trick 'r Treat manages to nail the feel of Halloween, the cartoon grotesqueries, the flickering pumpkins and the local legends retold with a supernatural bent.

If only it could have been scary too...