The Chronicles of Narnia: The Voyage of the Dawn Treader; The Tourist

EXPECTATIONS: I don't think I've ever seen a movie that screams "Looks good on paper" as much as The Tourist. "Let's put the two people that you're allowed to want to have sex with and not be considered gay no matter what your gender in a movie TOGETHER! Genius!" Unfortunately, it would appear that the paper this looked good upon was written about seven years ago, which was also the last time either of its stars looked good (or made good films).

REALITY: I am confident that if I lived in a movie, I could be the greatest thief the world has ever known. Not because I have any special skills that would aid in this profession, but because police in movies are generally incompetent. The Tourist not only lives up to this trope, but also it embraces it as a complete narrative force. We open in Paris, with the top of the city's police force following International Mystery Woman Elise (Angelina Jolie), using such cunning techniques as "hiding behind a newspaper" and "driving very slowly behind her." But this is forgivable. After all, this is an American movie, and these are French characters. American movie law states that all French police not played by Jean Reno are ignorant boors.

Elise is told by her thief boyfriend Anthony Pierce to find a man, and make the police think that man is said Anthony Pierce. That's where math teacher Frank (Johnny Depp) comes in, and people are fooled for all of about ten minutes. But just when you think Special Agent Get'em and the Funky Scotland Yarders (Paul Bettany) were doing something right, their mole convinces notorious gangster Reginald Shaw (Steven Berkoff) that Pierce is out of hiding, so of course they go after Frank. (That's never addressed, by the way. The fact that there is a man in Scotland Yard leaking information to the mob is never dealt with ever again.) If you've seen the trailers for this movie, you've probably guessed that there's some kind of secret twist at the end, and you'd be right. You probably think you know what it is, and really it doesn't matter whether you're right or wrong. Pretend the twist is whatever you think it is, and i guarantee you'll still have put more effort into it than the scriptwriters. 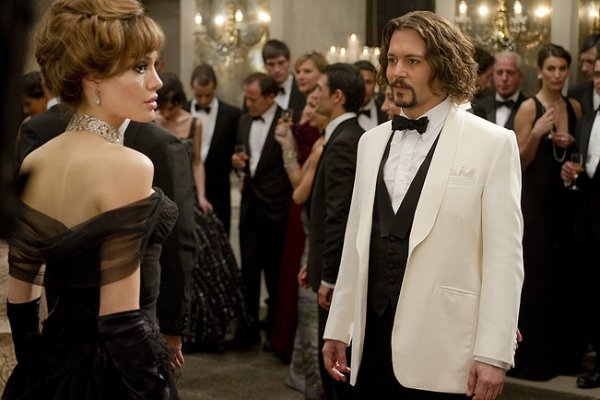 Wow, look at us. Awkwardly avoiding eye contact at parties. Fasten your jacket, darling, and stand up straight. People are looking.

So, the plot makes no sense, fine. That's not really what they're selling people on anyway. They're selling us on Johnny and Angelina, which would be fine if those two actors had any on-screen chemistry whatsoever. The fact that these two people -- who have proven themselves to be at-least-competent actors -- can't even find a hint of spark suggests to me that maybe they should take roles that require them to do something other than impressions of Johnny Depp and Angelina Jolie. Not very good impressions, at that, though I would guess Angelina can do a pretty spot-on Johnny Depp. 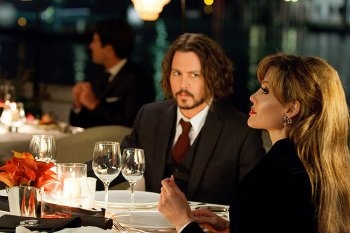 I've enjoyed our uncomfortable dinner together. Are we going to split the err... I'll just get this, shall I? My treat, again.Okay, so the plot makes no sense, and the acting's lousy. But maybe they can salvage it with some cool action scenes, right? No. No, not at all. Unless you consider Johnny Depp running barefoot across an obviously green-screened Venice rooftop action-packed. (The amount of green-screen used in this film makes me wonder why the crew even bothered to go to Venice at all. I'm assuming Depp owns a place out there where they would all get smashed after a long day of pretending to care about this movie.) There is actually one moment of moderate action, but by that point you're already so bored it just seems completely silly.

As the movie rushes to its anti-climax, and Frank the Math Teacher has escaped with one of Scotland Yard's top agents literally four feet away, as an audience, you start to realize you're the one who's being robbed. There's a showdown that builds no dramatic tension, because you know there's only one way it can end -- in bitter, terrible disappointment. And as you shuffle out of your seat, hoping you can be first out of the parking lot, a saddening revelation falls upon you: Angelina Jolie isn't that hot anymore. She's just not. And now she has your ticket money.

So is there anything worth looking at in this movie? Well... the set looks pretty. In a move completely apropos of a film called The Tourist, the scenery made me really want to visit Venice. Even if Steven Baldwin has to protect me from sharks in the canals, I'd at least be in a more interesting and equally logical film.

MINORITY REPORT: You meet a stranger on a train, and that stranger is me. I approach you in a sly and mysterious way, and I am immediately arrested because of that restraining order. You win this time, Angelina Jolie! - Montague "Legally Sane" Smythe